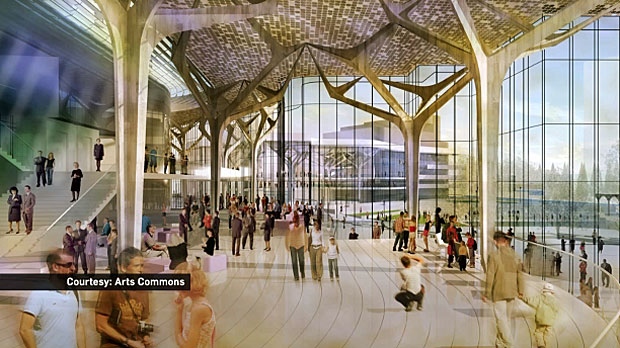 The federal government is pledging $80 million toward the Arts Commons expansion project, but the money is contingent on other orders of government also committing money.

The federal government is committing $110 million in funding for two infrastructure projects that will benefit Calgary's arts community, but the money is contingent on other levels of government providing financial support as well.

The feds are pledging $80 million to Arts Commons for its two-phase expansion and $30 million to Contemporary Calgary for work renovating and expanding the Centennial Planetarium.

The first phase of the Arts Common project will see a new, 173,000 sq.-ft. performance centre built on the northwest corner of Olympic Plaza, which will have 1,500 seats in three theatres.

The $80 million in federal funding is contingent on the province and city providing the remaining $135 million needed.

Once complete, Hehr said the Arts Commons space will support 1,000 jobs in the city and provide a $95 million boost to the local economy each year.

The full cost of the Contemporary Calgary project is $117 million, with the city recently announcing $25 million toward the project to complete the first phase. Another $30 million will be needed from the province and $32 million from the private sector to complete the work.

Hehr noted Calgary is the only city of its size in North American without a major, Class A contemporary art gallery capable of hosting significant international exhibitions and the Contemporary Calgary project will change that.

“The Government of Canada is pleased to support this important cultural project for the visual arts in the heart of Calgary,” said Hehr.

“Contemporary Calgary will become a signature cultural destination in Canada and these types of investments not only enrich our community but help attract business and talent to our city.”