Gimme shelter: Calgary Transit passengers frustrated as rash of vandalism leaves them out in the cold

Gimme shelter: Calgary Transit passengers frustrated as rash of vandalism leaves them out in the cold 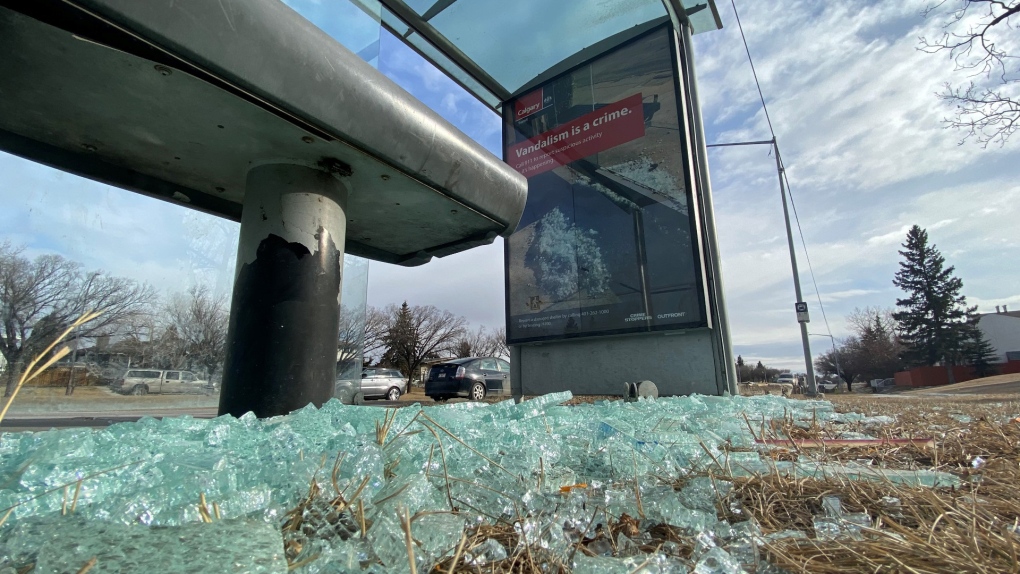 A vandalized bus shelter in the 6800 block of Centre St. N. on Monday.

Vegas Gibson and her two sons Will and Ricky huddle outside a bus shelter on Centre Street N.W. as a bitterly cold north wind howls.

The young family can’t escape the biting wind as the shelter at the stop has been smashed by vandals, heaps of shards of broken glass litter the cement pad.

"I think whoever is doing this really needs a good hard look at themselves and ask themselves 'Why?'," said Gibson. "Because, for one thing, they're making it difficult for everybody else, and they’re not using the bus shelter that’s obvious.

"It would be really useful to use a bus shelter on a windy cold day like this. They really do help."

Bus shelters along Centre Street North have been a favourite target for vandals. Over 200 have been smashed in the past five years in the stretch north of McKnight Boulevard .

The pandemic appears to have exacerbated the problem, as bus shelter vandalism citywide more than doubled in 2021.

Outfront Media Canada has a contract with the city to maintain shelters. According to the agreement, glass must be replaced within 24 hours of damage being reported.

The shelter where Gibson and her children stood was vandalized last week, but still remains in disarray.

Questions to the Calgary branch of Outfront Media were referred to their Toronto head office. Calls to that office have gone unanswered.

Calgary Transit has said supply chain issues, especially sourcing glass, has been the main cause of delays in repairing damaged shelters.

But there appears to be some good news on the horizon.

"Our contractor has been able to order all the glass they need to make the repairs on all outstanding shelters," said Calgary Transit spokesperson Stephen Tauro in an email sent Monday afternoon. "They expect shipment of glass to start next week and could have all shelters that are missing glass back to full operation within a few weeks."

Madigan Drive Northeast in Marlborough Park is another area frequently targeted by bus shelter vandals. It is in the ward of Coun. Andre Chabot, who says part of the problem is many people have simply given up and have stopped reporting damage.

"It's like no one cares. If somebody breaks a pane of glass and it gets cleaned up right away than the people who broke it realize somebody's watching."

Chabot says the city has explored mounting cameras near some of the most vandalized bus shelters but that idea has been nixed because of privacy concerns.

"Videotaping somebody who might not be on transit property becomes an issue," explained Chabot. "If we were only recording on city-owned property like on the LRT stations —which are entirely owned by transit — there we can. But when you're talking about out in the public, like bus shelters, it's more challenging. You have some legal implications."

The city has also examined replacing the shattering safety glass in bus shelters with plexiglass or Lexar, but found those materials present even greater safety and maintenance concerns.

Indeed, the shelter on Centre Stree — the one Gibson and her two boys shivered next to — has a large poster advising anyone to call 911 and report a crime in progress when they spot suspicious activity.