CALGARY -- When the snow finally started melting and the tarps were lifted back, golf course operators in Alberta were raring to go.

But they can’t let golfers onto the courses just yet. They have to wait for the green light from the Alberta Government and Health officials.

Play Golf Calgary C.O.O. Slade King said it’s tough not letting golfers on the fairways when everything looks so good.

“Springtime comes and the sun is shining and the snow has melted and you feel excitement,” King says.

“It builds when you pull back the tarps. The greens look fantastic. You’re ready to go -  and no golfers.”

King and several others in the Alberta golf industry have been working hard, trying to convince the Alberta Government and Health officials that golf is a game that can be played in a safe and touch-free environment. 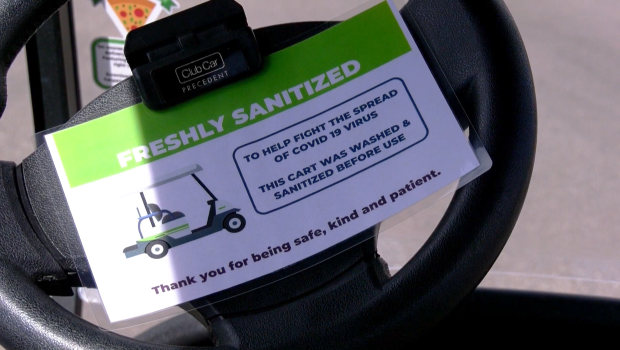 Glen Eagles in Cochrane decided to give CTV Calgary a first hand look at what playing golf in a pandemic could look like.

King says Alberta had the luxury of looking at other golf courses in the United States and British Columbia to see what the best practices are.

“We’ve compiled a list and sent it out to all of the courses in Alberta. So for us, we start right at the gate and make sure they have a tee time.”

If you don’t have a tee time, you don’t get in. King says they will also check that golfers aren’t coming to the course too early so that they can’t congregate near the clubhouse. He says all of the check ins will be done outside.

“From there, you’re coming down you’re doing a completely touch-free check-in. You’re able to pay in advance with your credit card when you book your tee time.”

There’s plenty of signage at the course to inform golfers of all of the new rules. Now you’re ready to head out onto the course. King says the first thing you do is get into a sanitized golf cart.

“The power cart is completely cleaned between every customer and we’ll have single rider use as well so you would have the cart to yourself for the entire round," King says.

“You go down to the first tee and again we’re using technology. We have a T.V. That’s going to tell you when your tee time is," he says.

“You’ll find no rakes. You’re just going to use a preferred lie. Give yourself a little kick and make sure you can hit it.”

And you won’t be picking up the ball out of the hole either, says King.

“We’ve developed a lifting device to pull your ball out of the hole. You’re using your putter. It lifts it out of the hole and then you can pick it up without touching.”

King says he and others are hoping for good news from the province on Tuesday. He encourages people to download the Play Golf Calgary app to get educated on all the changes.