A Calgary man, who has been working hard restoring a piece of Canada's military history, says he did it to tell an important story of a very special aircraft.

For the last several years, retired engineer Barry Halliwell has toiled in the workshop of Calgary’s Hangar Aircraft Museum, meticulously recreating the tail section of an Oxford aircraft.

The British forces sent pilots to Canada to train on the Oxford before flying in larger planes like Lancaster bombers on missions in Europe.

The Oxford was almost completely of wood so, as a result, there are few left in existence.

"They’ve deteriorated," says Halliwell. "They were sold off to farmers on the Prairies as war surplus and they've deteriorated, and the remains are sitting in coulees."

Using wood sourced to match the 1930s original, the construction of Halliwell's full-sized replica is accurate to the finest detail.

Using copies of the original plans from British Aerospace, Halliwell reconstructed every piece by hand, even milling the bolts to original specifications.

"I didn’t take many shortcuts," Halliwell said, laughing as he recapped the thousands of hours he put into the project. 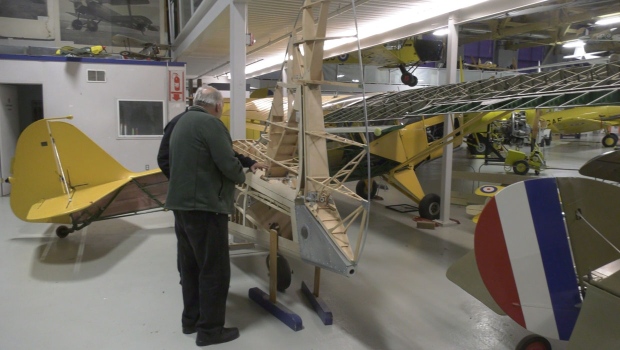 The tail section is the first step in a complete rebuild of an Oxford, which will be housed at the Red Deer Airport.

During the Second World War, it was known as CFB Penhold. At its peak, there were close to 200 Oxfords stationed at the central Alberta base.

The Harvard Historical Aviation Society, based at Red Deer’s airport is currently completing the restoration of a Tiger Moth plane, and is clearing the space to display Halliwell’s restored tail section, known to airplane enthusiasts as an empennage.

But the work isn't over yet because Halliwell is planning to reconstruct the rest of the aircraft.

"From here, we will go and build the spar section of the aircraft - which is the centre section," says Gary Hillman, the society's vice-president. "The back of the airplane will be built forward from here toward that spar."

Hillman hopes within five years, the group will have completely rebuilt an Oxford, to its 1930s factory design.

However, the replica won't be able to fly. As part of the deal with British Aerospace to supply the plans, the society had to promise the plane would not be airworthy.

"It’s not so much the airplane as the story it tells, and that story has to do with the people that came over here and sacrificed their lives for the freedom we have today."

When complete, the aircraft will be one of only three restored Oxfords in Canada, part of a handful in the entire world. There is one flightworthy Oxford housed in a museum in New Zealand.