Heightened risk of domestic violence in Alberta during COVID-19 pandemic

CALGARY -- Families across the province have confined themselves in their homes in an effort to stop the spread of COVID-19 but for many the living arangement comes with its own dangers.

The Calgary Domestic Violence Collective says social distancing and self-isolation can be dangerous for victims of domestic violence.

The Calgary Police Service hasn’t seen an increase in domestic-related calls since the outbreak but that doesn’t mean the risk doesn’t exist.

"The calls we’re getting, we’re starting to see the transition now as it relates to COVID-19."

MacKillop says it’s not uncommon to see a spike in domestic violence rates during natural disasters or tough economic times.

In China, the women’s rights organization Weiping says there has been a threefold increase in reports of violence against women as the country emerges from a total lockdown.

The concern is especially high in Alberta which already maintains some of the highest rates of domestic violence in country.

"There’s massive unemployment. You have the health scare and the fear and anxiety surrounding that. You have oil plummeting, especially in Calgary. All of these things are increase stressors for families," says MacKillop.

Supports in Calgary are already stretched thin due to the pandemic.

Shelters remain open in the city, including the Calgary Women’s Emergency Shelter. However, staff have had to adapt to new screening and social distancing measures. They’ve also shifted to offer a lot of their counselling services online.

Other organizations like the Women In Need Society (WINS) have had to close their thrift stores all together but staff are still working behind the scenes to sort donations.

"It’s one of the hardest decisions I’ve ever had to make," explains WINS executive director Karen Ramchuk. "The need for help has increased, so the number of calls we’re getting for help right now is up about 70 per cent."

With no clear end in sight for the COVID-19 crisis, it’s more important than ever to check in on family, friends and neighbours.

"Perhaps it’s safe word you use or maybe it’s a text or a GIF or funny thing you send through your phone to say, you need help," said MacKillop. 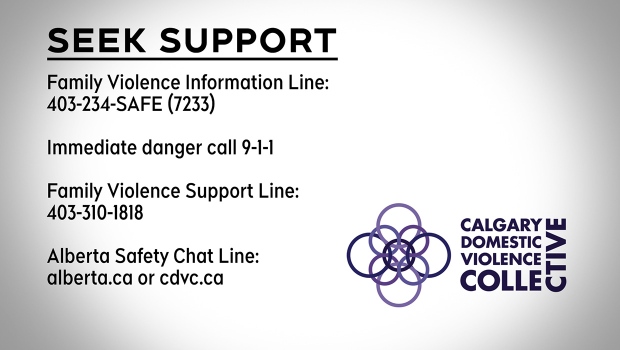