The World Deaf Curling Championships (WDCC) are underway in Banff, with a total of 10 teams — five women’s and five men’s — gathered from around the world at the Fenlands Recreation Centre for two weeks of competition, with players hailing from Canada, the United States, Korea, Poland, Switzerland and Ukraine.

The Ukrainian teams were practicing in Latvia when war broke out in their homeland.

"None of us ever believe that a war would break out in Ukraine. And then the next day, we saw the first bombs, the first artillery come in," said Vadym Marchenko, skip of the Ukrainian men’s team.

"And so it was very difficult for us to maintain practice, we took a couple of days off, we were so distraught. And then we realized it was impossible with the war to return."

At that point the team members split up, joining family in countries across Europe. The Canadian deaf community rallied, raising funds to bring the teams to Alberta for the competition.

"And now we've come, and people have been so generous, so positive toward us. It's inspiring. It's been really helpful to stop thinking about war and thinking about (curling)," said Marchenko, whose home is Lviv, in western Ukraine.

His partner is also in Banff competing in the championships.

"The whole war is not part of their control, right? They deserve to play, they've trained hard to come for this event," said Grela.

"The war has broken out but that shouldn't be a barrier for them. We wanted to support them. The deaf community is small, globally, nationally. And so if we were in the same situation, we would look for support. And so this is just what we needed to do. They deserve to come as athletes." 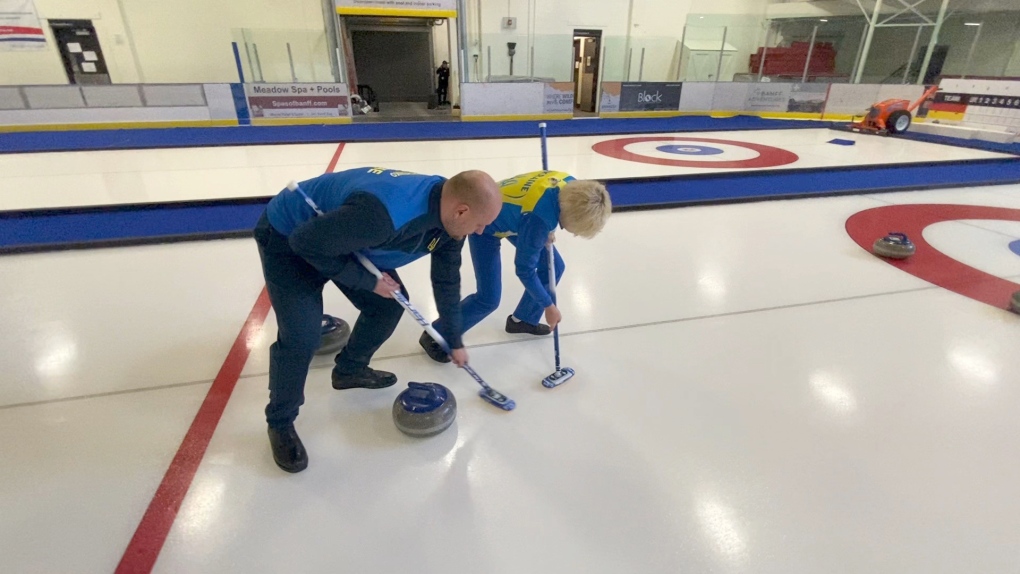 Curlers in the WDCC understand that, depending on the outcome of the war, this may be the last time these athletes compete under the blue and yellow flag of Ukraine.

"All of us recognize the importance of supporting Ukraine. Possibly, this could be the last time that we see a Ukrainian team compete," said WDCC chairperson Mark Kusiak.

"They have trained, and they deserve to be here. When the war broke out, it was just so important to bring that team here, and to be able to support them, because, what if this is their last opportunity to participate at the international level? We want them to enjoy the experience."

Kyiv resident Olena Zubarieva is lead of the Ukrainian women’s team. Her 22-year-old daughter has left Ukraine for France. She checks daily with friends in Ukraine's capital to see if the four-storey apartment block where she lives is still standing.

"It's very difficult, of course, with family and friends and so on. We haven't had a lot of communication while we've been here. And so our entire country just prays for peace, we want peace," said Zubarieva. "We know that things are very difficult and so we really just hope for one world one peaceful world. None of us wanted this conflict."

Both Zubarieva and Marchenko say competing in the world championships in Banff allows them, for a few minutes at least, a respite from constantly focusing on the conflict in their homeland.

"It's been helpful because it allows me to forget temporarily that there is a war going on," said Zubarieva. "It allows me to focus on my sport of curling, which is absolutely inspiring. So that we can forget about the war."

Of the 10 Ukrainian players in Banff for the WDCC, five are hoping to remain in Canada, the others will head back to Europe, though none expect to return to Ukraine until the war has ended.

Zubarieva and Marchenko are both among the five hoping to remain in this country when the competition ends. Members of the Alberta Deaf Sports Association are helping the players navigate the process and arranging accommodation for the five who will stay.

"I don't even know how to express my gratitude," said Zubarieva."I'm just incredibly grateful. I have no words for that in terms of bringing us here. And everyone has been so, so, so friendly."

"People have been so generous, so positive toward us. It's inspiring," said Marchenko.

"We just express so much thanks and gratitude for everything that they've done. And we know that when this war starts, we will always remember how much Canada supported us. So even if we leave Canada and return to Ukraine, you will always be in our hearts."

Russian missile attacks on residential areas in a coastal town near the Ukrainian port city of Odesa early Friday killed at least 18 people, including two children, authorities reported, a day after Russian forces withdrew from a strategic Black Sea island.

A rare portrait of Diana, Princess of Wales, will be on public display for the first time after it was recently sold for US$201,600 at auction.