CALGARY -- Calgary restaurant owners have been offering take-out or food delivery service only during the COVID-19 pandemic but many say fees from third-party services like Skip the Dishes and Door Dash are causing additional financial grief during tough economic times.

Stephen Deer, owner of Modern Steak, says his restaurant has lost about $72,000 in delivery fees since the beginning of the pandemic.

"The fees are exorbitant and it continually makes you question if you should actually be using the services at as high as 30 per cent of every transaction," he said.

"So for every $100 you ring through your business, they are taking $30 and the dynamics of our business when someone takes that much makes us highly unprofitable."

Deer adds that his sales would be down about 50 per cent if not for third-party delivery apps.

"The delivery apps are great but at the same time, between the high fees and them taking no responsibility for anything, they become a risk to our business too."

Restaurant owners who spoke with CTV News said their average commission charge for delivery apps was anywhere from 25 to 32 per cent.

Apps like Door Dash say they realize the issue and have provided temporary relief.

"Doing our part during this unprecedented time, when delivery is an essential service, is vital, which is why last month we began providing a robust package of an estimated $100 million in commission relief and marketing investments nationwide," reads a statement from Door Dash.

"That includes cutting commissions in half for more than 150,000 restaurants throughout the United States, Canada and Australia through May to help give local restaurants the additional revenue they need to survive." 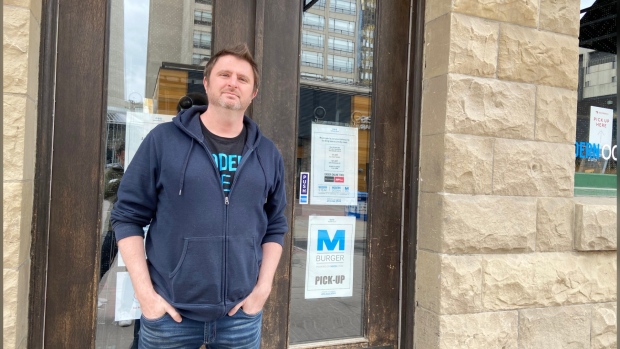 Some Calgary restaurant operators, like Laurel O’Leary, say they aren’t getting that relief.

O’Leary's restaurant Escoba works exclusively with Door Dash and says she hasn’t seen any changes to her bill.

"When I finally did some reconciling of my bank balances, I noticed right away that we had not received the 50 per cent reduction and contacted Door Dash right away," she said.

Escoba has been hit particularly hard already as the traditional ‘dine-in’ restaurant has reduced its menu prices by 20 per cent to stay competitive as a takeout service.

"For each item, it probably costs me about a $1.50 that goes out the door for Door Dash so that’s no money made on any of the items that go when you factor in the cost of takeout equipment and our reduced pricing that we did."

Support from Skip the Dishes

Delivery app Skip The Dishes says it has already offered relief for restaurants and will continue to do so.

"On March 16, Skip launched a 30-day support package which has given back more than $5 million to our restaurant partners through a 15 per cent commission rebate," reads a statement from the company.

"Immediately following, we extended and increased the package with a 25 per cent reduction of fees for local, independent restaurants as well as new order-driving initiatives, which will provide over $10 million in savings to local restaurants."

The food delivery company also notes that it will offer a 10.5 per cent commission rate to any restaurant on its apps looking to utilize staff to facilitate their own delivery.

While some restaurant owners are feeling the pinch from high delivery fees, other Calgary restaurants claim to be thriving.

"Skip the Dishes is bringing us consistent business and new customers all the time," said Lisa Ly, owner of Oriental Grill Vietnamese Cuisine.

"We’re getting so many orders through Skip the Dishes that we’ve been able to retain our full staff and hire new people. Their 25 per cent commission rebate is really helping us through COVID-19, and I feel like their team really cares about us and wants us to do well."

But not everyone agrees.

Deer says he was highly disappointed by Skip’s response.

"It was a lot of smoke and mirrors," he said. "They’re announcing they’re going to reduce their rate by 25 per cent but that’s 25 per cent of the 30 per cent they’re charging which moves it around the 22.5 per cent range versus their competition, Door Dash, which did the right thing and reduced it down to 13 per cent."

Deer says Skip’s contributions to the restaurant industry across North America don’t amount to much in the grand scheme of things.

"It was a PR move — I think something that’s forgotten is that not only are we charged exorbitant rates to use the service, there’s also high cost in packaging, staff and safety protocols."

A Calgary digital marketer representing 13 local restaurants has now started a petition to address the issues of too high commission being taken on food delivery for third party apps.

Rafael Duran wants the City of Calgary to implement a 15 per cent cap on delivery fees.

Seattle Mayor Jenny Durkan recently put in place a 15 per cent resolution for her city until dine in options are back fully but Calgary Mayor Naheed Nenshi doesn’t foresee his council reaching such a resolution.

"I’m not convinced we have the powers to do that under the Municipal Government Act," Nenshi said. "Look, I’m a free market guy and prefer to let the market sort it’s self out before we have to engage in all of this, but really the right way to do that is for customers to manage that."

Nenshi adds the best thing customers can do is pick up food themselves if they are able. He encourages Calgarians to also call restaurants or go to their website to ask what their best delivery option might be.