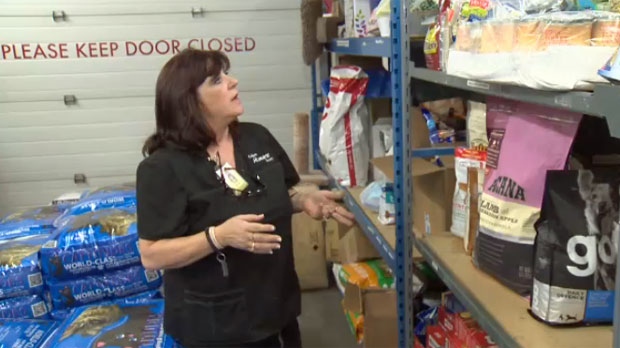 As economic uncertainty continues to burden many Calgarians, several agencies are reminding the public of available resources to ensure pets don’t fall victim to financial hardships.

The Calgary Humane Society offers an emergency food bank to help pet owners during a time of need.

“This is something that we have designed as a way to help people in an emergency type situation,” explains Sage Pullen-McIntosh, Calgary Humane Society’s Manager of Communications. “Typically it’s used by people who have fallen on difficult financial times, maybe they’ve lost a job, are in the process of getting another one and they’re just not able to feed their pet at that moment.”

The food bank is designed to assist pet owners on a one time basis and is not a sustained use program. The Humane Society redistributes donated supplies that may differ from the diets of its sheltered animals.

Calgarians in need of the emergency food bank for pets may fill out an application form at the Calgary Humane Society, 4455 110 Avenue Southeast, and leave with a package consisting of dry pet food, wet pet food, and treats.

In addition to its food bank, the agency donates any excess pet supplies to local rescue agencies and the Calgary Inter-faith Food Bank for distribution to pet owners.

Pullen-McIntosh says the Calgary Humane Society has seen an increase in surrendered and abandoned animals in the last three years and the trend is expected to continue.

“Kitten season is starting earlier and we do anticipate it’s going to be a very busy spring and summer.”

In 2014, 5,500 animals were surrendered to the agency. The tabulation of 2015 numbers has not been completed but officials expect the number will near 7,600 animals, and the Humane Society has had a busy start to this year.

“When people do surrender animals to us, we do ask them the reason,” said Pullen-McIntosh. “We’re hearing more and more from people it’s either a situation where they’ve lost a job, they have to move because of a situation due to the economy, moving to no-pet housing.”

“It does speak to what is going on in the economy right now.”

The City of Calgary’s Fair Entry program offers low-income Calgarians the opportunity to receive reduced or waived fees for several services including no cost spaying or neutering of pets.

“All city departments work together to ensure that Calgarians have equal access to services and programs provided by the City,” said Dustin Rogers of Calgary Community Standards. “More importantly, this allows us to control the number of pets that are abandoned or surrendered as well as the total pet population.”

“For families that meet the low eligibility requirement, it basically allows them to afford a pet.”

Rogers says the number of dogs and cats that have been spayed or neutered for free through Fair Entry this year is nearly double the numbers of early 2015.

“It could be contributed to the economy but we like to believe that it’s because of increased awareness of the program,” said Rogers. “We’ve been regularly advertising the program.”

To qualify for Fair Entry, applicants must:

For more information on the program and its subsidies, visit City of Calgary Fair Entry.