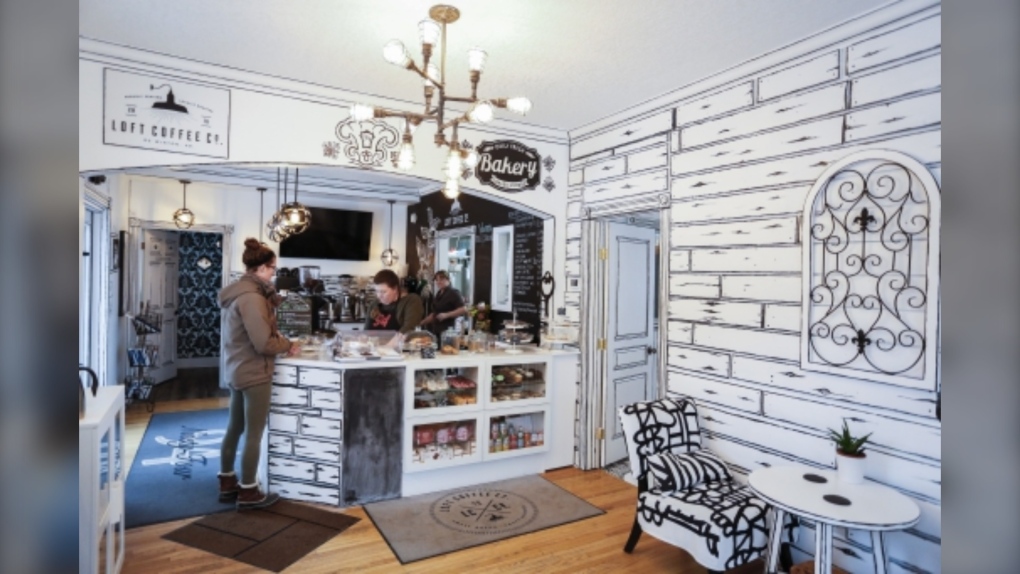 Customers at the 94 Take the Cake cafe and bakery enjoy a "2D" environment in Okotoks, Alta., Wednesday, Jan. 29, 2020.THE CANADIAN PRESS/Jeff McIntosh

OKOTOKS -- Customers walking into a bakery in a southern Alberta town may feel like they're stepping into the pages of a colouring book.

Sherry Lindenback says she was looking for a creative way to revamp her business, 94 Take the Cake Bakery, which is located in a more than 100-year-old home in Okotoks, about 50 kilometres south of Calgary.

Lindenback, an interior designer by trade, researched different ideas and was inspired to turn her shop into a two-dimensional colouring book.

To bring her vision to life, she spent hundreds of hours hand-painting everything in the cafe white and outlining it black.

And by everything, she means it: walls, mouldings, casings, floors, furniture - even curtain panels made out of wood are white and black.

Lindenback also collaborated with local artists, who added special touches to the walls.

"Everything had to look like it was a drawing," she says.

"Every time I was looking at something, I just kept remembering, 'OK, what would this look like if it was a drawing on a piece of paper?'"

The entire design creates an effect where things in the bakery, whether a cupcake or people sitting sipping coffee, seem to pop against the graphic backdrop, which Lindenback says almost doesn't look real in photos.

Since unveiling the new design in January, people have come in from Calgary and elsewhere to see the shop for themselves.

"I've had people drive from Edmonton ... two, three hours away, just to come and have a coffee and have a treat and be in this space."

Lindenback says she chose the design because it focuses on people - and it's interactive. She says creating something "Instagram-worthy" was also on her mind.

"Even my regulars that have been with me from Day 1 now all of a sudden are taking a photo or two when they're here."

- Those planning to visit Okotoks can also stop to see the Big Rock attraction, a gigantic glacial rock formation located west of town.

This report by The Canadian Press was first published Feb. 3, 2020.