CALGARY – Supporters, protesters and the media alike were burning the midnight oil in Calgary as Liberal Leader Justin Trudeau visited the city for the first time in the campaign, just a short time before Canadians head to the polls.

Trudeau spoke at the Magnolia Banquet Hall in northeast Calgary to help support local candidate Nirmala Naidoo, who is running in the Calgary Skyview riding.

The leader was met by a number of protesters carrying signs, accusing him of treason, as well as about 1,500 of his own supporters.

The party won four seats in the province during the last general election and Trudeau told the gathering there are progressive voters in Alberta.

Trudeau said the Conservative Party is putting forward "politics of fear and division."

"Their platform, which they kept hidden from Canadians for most of the campaign that they ended up releasing late on a Friday night of a long weekend so that no one would notice that the only thing in that platform is $53 billion of cuts."

Meanwhile, a group of protesters with strong Conservative opinions, especially in relation to the energy sector, stood outside while Trudeau spoke.

“Thanks a lot. Don’t even bother. Go home,” said one man. “To come for one hour at the eleventh hour is a joke, but actually I wish he had never come anyways.”

It was a very short visit to the Alberta city; Trudeau's campaign speech was about 10 minutes long, and he flew to Vancouver afterwards.

“I think it's noteworthy in the first place that he drew a larger crowd than Andrew Scheer did when he came here,” said Lori WIlliams, a political scientist at Mount Royal University.

Williams added there is a likelihood of a minority government being elected.

“In a minority situation, given that the Trudeau government already has the pipeline construction sort of on the way, already done the work towards that, because they don’t need new legislation to continue work on Trans Mountain," she said.

Trudeau's Calgary stop was also his first in the city during the campaign period. Trudeau last visited Calgary during Stampede.

The event was part of a late push by the Liberals to gain support in a region expected to vote Conservative on Election Day on Monday.

Vote like your planet depends on it - because it does. Vote Liberal. #ChooseForward pic.twitter.com/Kyi1BF5cP6

According to the latest polls, the Conservative Party is holding a very slight lead on the Liberals. 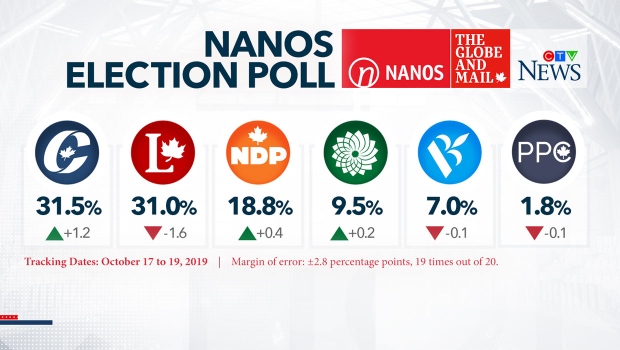 The one major federal pary leader who did not campaign in Alberta was the NDP’s Jagmeet Singh.

”Jagmeet Singh has apologized for not making it here. It may have to do with the fact that the NDP have limited financial resources,” Williams commented.