Jyoti Gondek is officially Calgary's first female mayor; she was sworn in at city hall on Monday.

Gondek served one term as the councillor for Ward 3 before running for mayor, beating rival and former Calgary councillor Jeromy Farkas.

Though she took part in the swearing in of 13 of the 14 Calgary councillors, she stepped aside when Ward 4 Coun. Sean Chu stepped up and let Associate Chief Justice John D. Rooke swear him in instead.

"I didn't want to swear him in, it did not seem right to me," Gondek told journalists Monday.

"The justice was willing to do it, and I felt that was more appropriate." 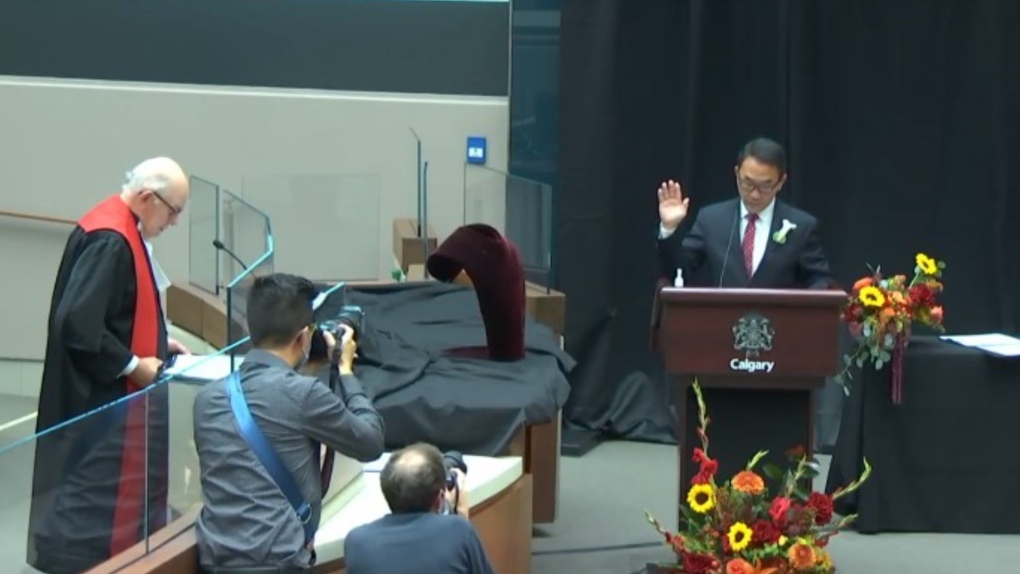 Gondek had previously said she would not participate in Chu's swearing-in ceremony amid his recent admission of having a sexual encounter with a teenage girl when he was a 34-year-old police officer in 1997.

"We have reached a line in the sand moment when it comes to councillor Chu and many, many members of council, myself included, have called upon him to do the right thing," said Coun. Gian-Carlo Carra, who was re-elected to serve in Ward 9.

Chu refused to speak to media on Monday.

There are many new faces at city hall including nine new council members and two councillors — Richard Pootmans in Ward 6 and Andre Chabot in Ward 10 — who are returning after not running to represent their respective wards in 2017.

"This is indeed a very odd swearing-in ceremony because of COVID, but I'm pleased so many people could join us online," Gondek said.

"This council will get along. There's many big things Calgarians are expecting from us and we have all had a very frank conversation with each other about how we need to work together."

After being sworn in, the new council voted on a motion to appoint returning Ward 14 Coun. Peter Demong as deputy mayor, which was carried unanimously.

The original version of this story indicated Ward 8 Coun. Courtney Walcott was the first Black person elected to Calgary city council. Virnetta Anderson was elected to council in 1974.