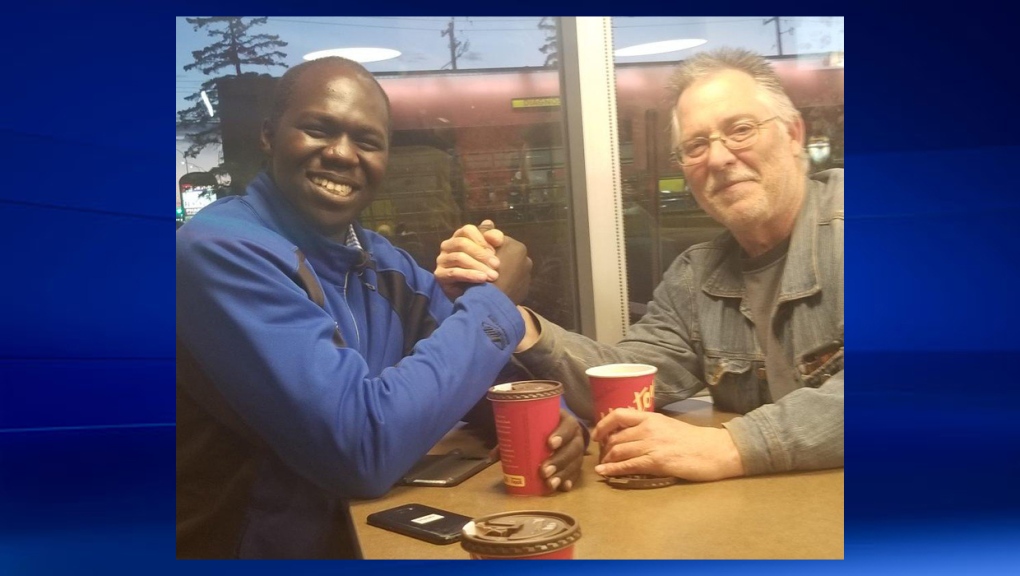 Calgary-East candidate Gar Gar and the landlord who damaged one of Gar's signs met on Friday for coffee and to discuss the incident (image: GarGar4YYCEast)

Gar Gar, the Alberta Party candidate in Calgary-East, and the landlord who damaged one of Gar’s campaign signs earlier this week met for coffee on Friday to discuss the unfortunate encounter.

Steve, a landlord in Calgary-East, took exception with a Gar sign that had been placed on his property with his tenant’s approval. Steve proceeded to destroy the sign as Gar watched on. The incident was recorded and the video was posted to social media.

In the days following their encounter, Steve sent an email to Gar expressing regret for his actions. Gar share Steve’s note on Twitter.

‘Dear Mr Gar, I would like to apologize to you for over reacting when you put a sign on my lawn would like to fix, or pay for any damage I may have caused. I hope you will accept my apology. Than You, Steve’

Gar says he responded to Steve’s email with an offer to speak over a coffee to ‘make things right’.

On Friday night, Gar shared a photo from their meeting.

Grateful to meet w/ Steve tonight. He did personally apologized for the incident. Indicated that he just had a bad day & will also be apologizing to the renter.

Gar tells CTV his conversation with Steve last somewhere between 45 minutes and an hour.

"We talked about the incident. He explained the fact that he had a bad day, doesn't like lawn signs, and didn't know about the landlord act. (He) did not believe that I would forgive him. Told him that we are in to build our community which have a bad stigma."

Gar says he was truly grateful to have an opportunity to speak with Steve. "How surreal is this? It is all playing out in 24 hour real time and, by choice, in the public eye and on Twitter. A lot of good responses to this outcome."