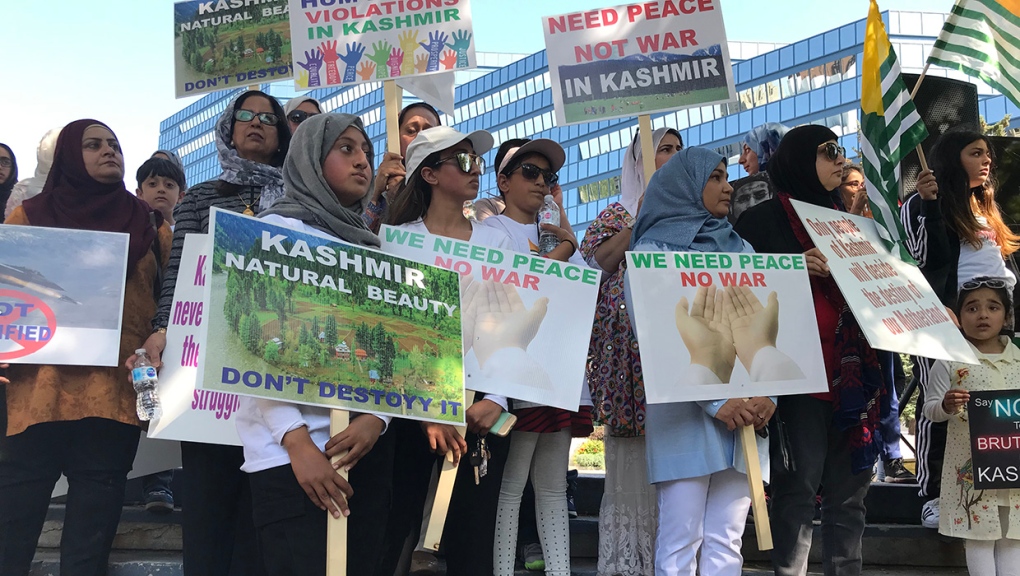 Members of the Kashmiri-Canadian community rallied outside Calgary city hall Thursday afternoon to draw international attention to struggles in the Jammu and Kashmir region.

India has removed the statehood status granted to Kashmir in 1947 when it gained independence from British colonial rule.

"Now it's under military rule," said rally organizer Tariq Khan, who is also former president of the Kashmir Canada Association. "There’s no communication, there’s no Internet, there is no television."

"It's under seige. (There are) 800,000 military personnel deployed in Kashmir Valley alone. We don't know what 's happening with our families."

India's Hindu-led nationalist government imposed an unprecedented security lockdown and a near-total communications blackout in the Muslim-majority region since Sunday night. The map has essentially been redrawn for the area bordered by India, Pakistan and China.

Kasmirir Calgarians are expressing distress at not being able to communicate with loved ones.

"My uncles, aunts, we haven’t been able to reach out to them, people cannot get out of their homes to go to hospital," said Wasim Naqshbandi. "It’s a shame that India being the so-called largest democracy in the world is now one of the totalitarian and authoritarian regime. It has made North Korea look pretty good now."

Syed Sohardwardy, president of the Islamic Supreme Council of Canada, also did not mince his words in criticism of India’s government.  "Indian Prime Minister Narendra Modi is absolutely a modern time Hitler."

Protestors also want Kashmir to fulfill self-determination and are calling for Canadian government officials to intervene.

With files from the Associated Press