CALGARY -- Even though it wasn't directed toward him, former NHLer Akim Aliu says he found the apology penned by Calgary Flames head coach Bill Peters to be "misleading, insincere and concerning."

Aliu made the statement on social media Thursday, hours after Peters' apology was issued Wednesday night, and added he has accepted an invitation to meet with NHL officials.

"Out of respect for that process,, I will not respond publicly to the statement or discuss the racism and discrimination I have endured until after my meeting," he wrote.

Peters wrote the letter to Flames general manager Brad Treliving on Wednesday, apologizing for racist remarks made 10 years ago while he was coach of the Rockford IceHogs, the AHL affiliate of the Chicago Blackhawks.

"Please accept this as a sincere apology to you, and the entire Calgary Flames organization, for offensive language I used in a professional setting a decade ago," it read.

"I know that my comments have been the source of both anger and disappointment, and I understand why. Although it was an isolated and immediately regrettable incident, I take responsibility for what I said."

Peters added that the statement was made "in a moment of frustration and does not reflect my personal values," and that following the incident, he was confronted about it and "immediately returned to the dressing room to apologize to the team.

"I have regretted the incident since it happened, and I now also apologize to anyone negatively affected by my words."

The letter did not make specific mention of the Nigerian-born Aliu. 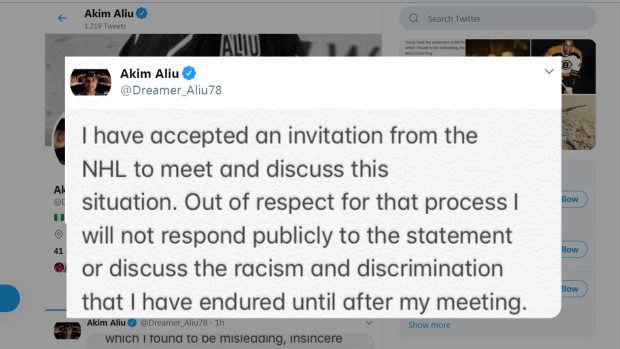 Treliving said following the Flames game in Buffalo on Wednesday that he had received the mea culpa and the team would continue its investigation.

"I know everyone wants everything done immediately," Treliving said. "We are not trying to stall or take time or drag our feet. It's a serious matter ... and I just want to make sure we're doing a thorough job."

Treliving added the team hopes to provide an update on Thursday.

A firestorm started earlier this week when Aliu posted on social media about an incident in the IceHogs dressing room during the 2009-2010 season, when Peters was coach and Aliu a rookie.

In an interview with TSN on Tuesday, Aliu elaborated, saying Peters hurled the N-word multiple times in reference to music the rookie was playing.

Aliu was drafted 56th overall by the Blackhawks in 2007 out of the Ontario Hockey League. He played 48 games under Peters with the IceHogs and 13 more with the ECHL's Toledo Walleye.

He would later play a total of seven games with the Flames in 2012 and 2013 — before Peters became coach — and played last season with the Orlando Solar Bears in the ECHL.

Aliu is currently a free agent.

Since Aliu's allegation went public, a number of other players have come forward with allegations of mistreatment and even physical abuse against Peters, some of which have been corroborated.