More Canadians than ever willing to receive the COVID-19 vaccine: Angus Reid poll

CALGARY -- A new poll suggests more Canadians than ever are willing to get the recently approved Pfizer-BioNTech vaccine as soon as possible.

That’s a big jump compared to the same survey conducted by the non-profit independent research group from Nov. 12 to 16, when 40 per cent said they would get the shot as soon as possible.

The numbers are up significantly in Alberta as well.

In November, only 32 per cent of Albertans said they would get the vaccine immediately, but that number has now jumped to 48 per cent since the latest rounds of COVID-19 restrictions have been imposed by the Kenney government.

And that 27 per cent saying ‘no’ is the highest in the country, according to the poll. Almost twice as high as the national average. 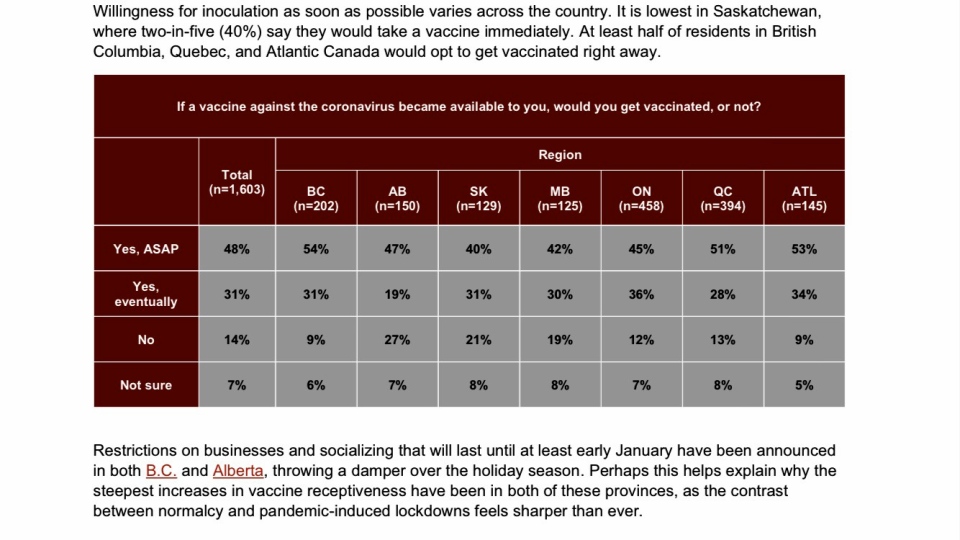 According to the poll, respondents aged 65 years and older are the most likely to get the vaccine (61 per cent), while the 35 to 44-year-old demographic scored the lowest (42 per cent).

In total, 70 per cent of those surveyed states they were concerned about longer-term side-effects and 14 per cent are against receiving a vaccine under any circumstance.

The overwhelming majority — 88 per cent — agreed that the vaccine should not be first come, first serve, but instead go first to those most at risk.

As for who should be required to receive the vaccine, 71 per cent agreed that it should be mandatory for all healthcare workers, followed by extended care-home workers at 69 per cent.

Half of respondents said the vaccine should be mandatory in schools, while workplaces (43 per cent) and public events (40 per cent) were deemed to be of lesser risk.