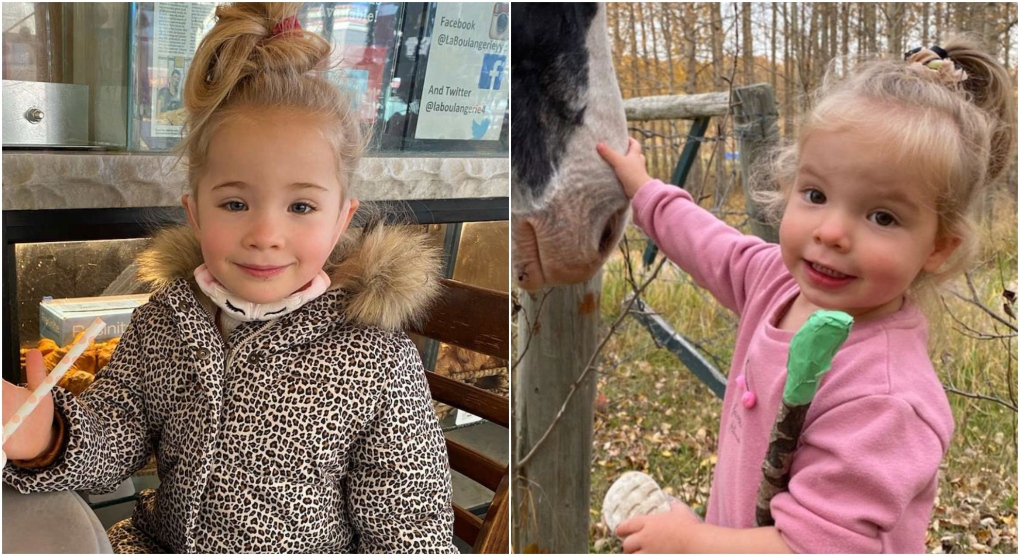 Leonine (L) and Wyatt (R) O'Driscoll-Zak are believed to be in the company of their grandmother and aunt. (Supplied)

CALGARY -- Southern Alberta RCMP continuing their investigation into the case of a pair of missing girls say they are convinced they have not left Canada.

Five-year-old Leonine O'Driscoll-Zak and two-year-old Wyatt O'Driscoll-Zak were reported missing at 9:30 a.m. on March 12. Police say they were last seen at their rural home near Cochrane, Alta., west of Calgary.

The girls are believed to be in the company of their grandmother Therese O'Driscoll, 68, and their aunt, Alison O'Driscoll, 38. According to the information they have received from public tips, police say it's likely all four are still somewhere in Canada.

Police also believe that since their disappearance is likely the outcome of a custody dispute, there may be people sympathetic to their situation.

"RCMP believe the O’Driscolls are receiving assistance to avoid apprehension," police wrote in a release. "The RCMP is making a request of anyone who may be assisting the O’Driscolls in hiding the children to contact police."

While those individuals may believe they are acting in the girls' best interests, officials add that anyone who helps in the commission of a criminal offence can be charged with aiding and abetting.

RCMP are treating the situation as a case of abduction involving their grandmother and aunt. Since they don't believe there is a risk of grave danger to either girl, police have not called for an Amber Alert.

"There is definitely some custody issues," Const. Shelley Nasheim with the Parkland RCMP told CTV News on Monday. "At this time there's no concern for the children's safety. It's just that they need to check their welfare. It's just a very volatile situation."

If you have any information in relation to their current location, please contact the Cochrane RCMP at 403-932-2211. If you wish to remain anonymous, you can contact Crime Stoppers at 1-800-222-8477 (TIPS), online at www.P3Tips.com or by using the "P3 Tips" app available through the Apple App or Google Play Store.