Justin Anderson-Louch is in his fifth and final year at Mount Royal University where he's taking business.  It also means he is wrapping up his soccer career with the Cougars and no doubt he wants to go out in style.

The Cougars midfielder did just that on Saturday against the University of Saskatchewan, when Anderson-Louch found the back of the twine from about 70 yards out.

It wasn't a shot in the dark, either, but rather one born from watching and waiting.

Anderston-Louch said as the game went along, he knew he was going to take a chance at a long kick.

"Early in the first half I saw their keeper was cheating quite often," said the 24-year-old.

"I don't know, just late in the second half I won the ball at midfield," he added, "and was able to just get it at my feet and let it go and it happened to go in."

No records are kept for scoring the longest goal in U Sports but the Cougars are quite sure this would be a record.

Head Coach Ryan Gyaki says the most impressive thing about the goal is it didn't bounce when it went into the net.

"I think there's probably been some other goals that are longer without the intention of scoring," Gyaki said.

"To hit a ball with such intent I don't think there would be many goals from that far out.

"There's cases in the highest level of the professional game where goalies clear the ball and it somehow goes in," he added, "or someone just kicks a ball out of their own 18 yard and it bounces and then goes in but such a long shot without it bouncing with pure intent?

"I'm not sure if there's many leagues that people have done it anywhere in the world."

Obviously Anderson-Louch has a powerful leg and he says he actually didn't get much assistance from the wind. 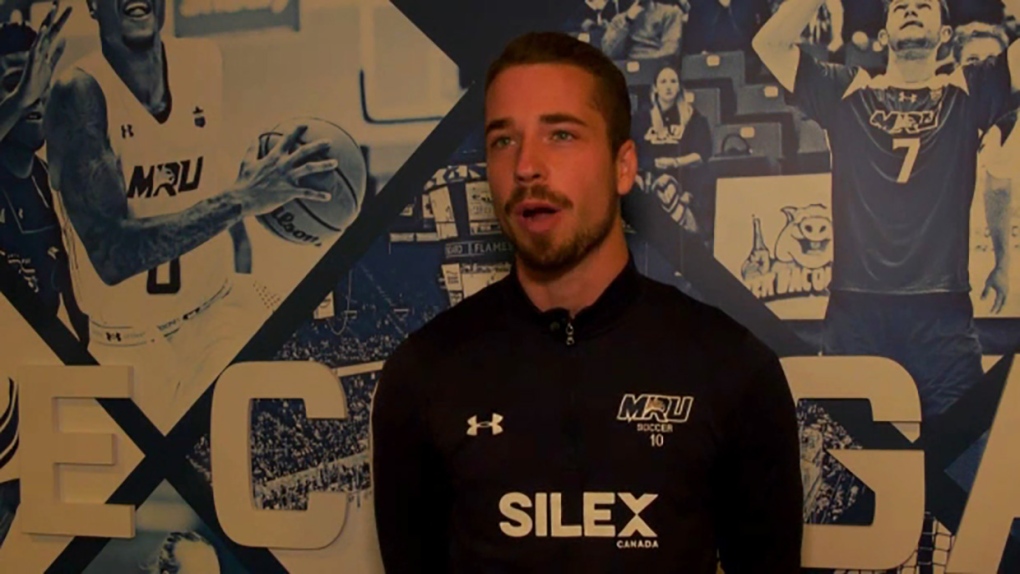 "The wind was coming from the side actually so the wind didn't really help me too much.  I don't know - I was just able to get it on my feet properly and just gave it all I had."

Defender Daniel Harrison has known Anderson-Louch for a long time.  He and his teammates went crazy after he scored the goal.  Harrison isn't surprised but says it was incredible to watch.

"I've played with Justin since I was about 12 years old and I've seen him score some crazy goals but that one is pretty special," Harrison said.

"He can hit them from anywhere.  I haven't seen a guy strike the ball like he does, it's pretty crazy what he does."

Anderson-Louch hasn't had the easiest of times during his soccer career at Mount Royal.  He's had to battle through injuries and that's what made this goal even more gratifying.

That and the fact  he did it on a big day.

"It was extremely special for me.  I've had a tough road with two knee surgeries which I've recovered from," he said.

"To score on my senior day like this in front of friends and family and help my team win was extremely special."

Anderson-Louch ended up scoring a pair of goals in the Cougars 3-2 victory over Saskatchewan.  The Cougars wrap up the regular season on Saturday with a game against the Lethbridge Pronghorns then it's off to the playoffs.  At this point, Mount Royal still isn't sure who they'll be facing in round one.