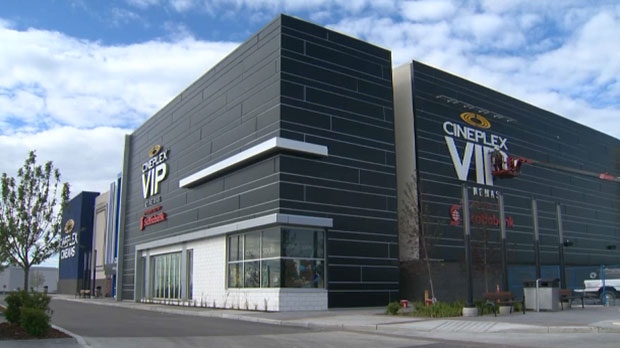 The first phase of Cineplex Cinemas Seton and VIP opened on Wednesday, July 11, 2018.

The Cineplex movie theatre in the city’s southeast that was damaged in a fire while it was under construction last fall finally opened to the public on Wednesday.

Emergency crews were called to a two-alarm fire at the theatre complex in Seton on November 5, 2017.

The VIP1 Auditorium was heavily damaged and other sections of the complex sustained smoke damage.

Investigators determined that the blaze was caused by an electrical failure and that it started in the second row of the VIP area.

On Wednesday, seven of the theatre’s auditoriums opened to the public and officials say the four VIP cinemas and the VIP Lounge will open in August.

“With the construction fire late last year seriously damaging the theatre just weeks before we were scheduled to open, Cineplex Cinemas Seton and VIP is a new theatre that already has a memorable history with the community,” said Ellis Jacob, President and CEO of Cineplex in a statement earlier this week.  “We are incredibly thankful for the patience of our partners, staff and Calgary movie-lovers as we worked tirelessly to get this theatre open and, of course, thankful for the Calgary Fire Department.  We are looking forward to hosting a VIP-inspired evening for all the firefighters who helped us last year when we open the VIP Cinemas later this summer.“

For more information on the Seton Cineplex, click HERE.