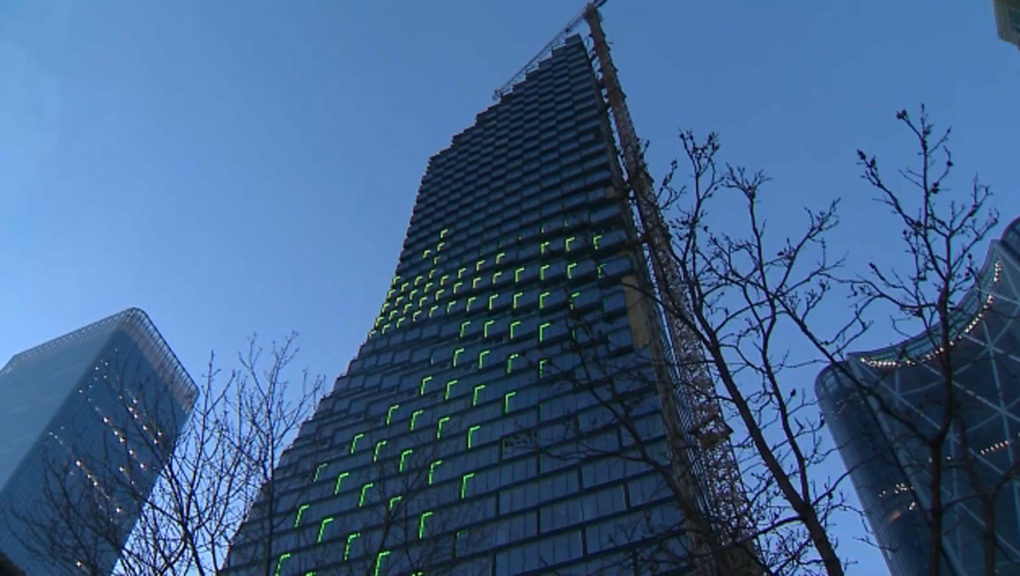 Northern Lights, a light sequencing display created by Douglas Coupland, was previewed on the TELUS Sky building on April 18, 2019

People in the downtown core were treated to a preview of Northern Lights, an LED art installation created by Douglas Coupland, on the TELUS Sky building on Thursday night.

LED lighting, encircling the window frames on the south exterior of the building in the 600 block of Centre Street Southwest, have been programmed to display colourful sequences with countless variations along the 700  square foot surface.

The renowned Canadian artist says the project was nearly four-and-a-half years in the making. Coupland admits he knew little about LEDs when he was originally approached to create the sequences but drew inspiration from the northern lights.

“In the intervening years I’ve been up to Yellowknife and I’ve flown back-and-forth to Calgary and Edmonton a lot of times, and the thing for me that’s always the magic, especially from the plane, is the aurora borealis north of the city,” said Coupland on Thursday night as he viewed the preview of the display from Le Germain Hotel. “It turns out many people don’t ever see it in real life so what if you could bring that into the city and make it visible for everybody? That was the starting point.”

Coupland says the displays will vary between gentle and noisy sequences, ‘not enough that you’ll get sick of it and just enough that you’re always sort of interested in what’s going to happen next’, and will end by 11:00 p.m. each night. ‘Northern lights’ consists of 26 sequences including ‘bouncing ball’, a dark circle that will appear to bounce up and down at the top of the hour.

‘Northern lights’ will appear different depending on the perspective of the artist. From the ground, people will become fully immersed in the display while increased visibility for the graphic sequences themselves will be apparent from other locations downtown and in the Beltline. Coupland says the experience will differ from afar. ‘Far away, in the suburbs, it actually does become like the northern lights.”

The artist is aware of how divisive the issue of public art has proven in recent years but champions its merits.

“Calgary is a difficult city for public art, and that certainly weighed on me when I started this project, but you have to have it,” explained Coupland. “I travel a lot and I go to places and they don’t have public art or respect for creativity in general and you don’t feel like you’ve actually visited a place. It’s doesn’t feel like it has a soul.”

The display is scheduled to become a nightly occurrence later this year once the TELUS Sky tower opens.