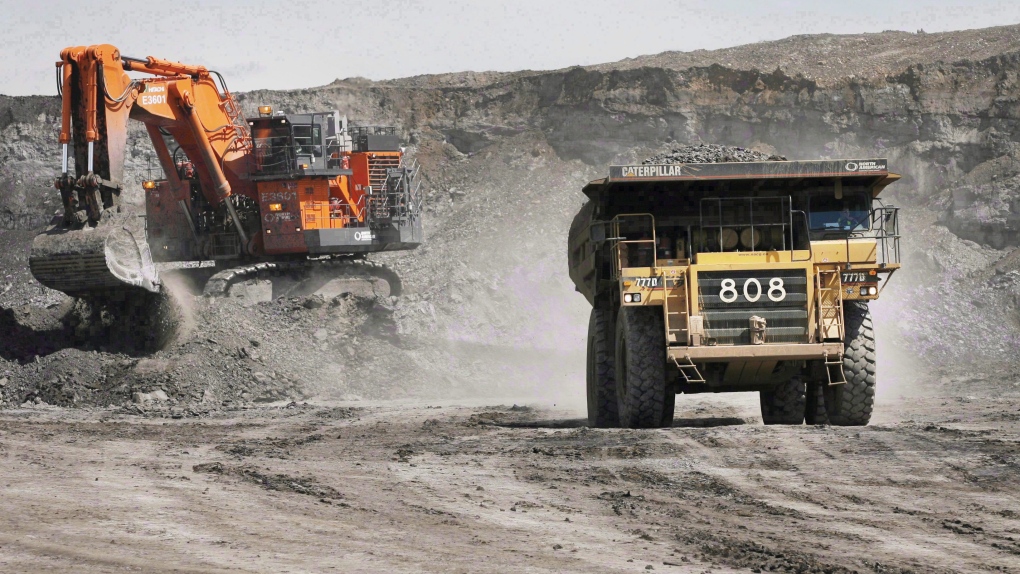 A haul truck carrying a full load drives away from a mining shovel at the Shell Albian Sands oilsands mine near Fort McMurray, Alta., on Monday.July 9, 2008. (THE CANADIAN PRESS/Jeff McIntosh)

CALGARY -- Analysts say oilsands producers are likely losing money or barely breaking even as prices for Western Canadian Select bitumen-blend crude dipped as low as US$3.82 per barrel on Monday.

Michael Dunn with Stifel FirstEnergy in Calgary estimates realized prices for bitumen crossed into negative territory late last week after deducting the cost of the lighter oil blend required to allow the sticky bitumen to flow in a pipeline.

Meanwhile, analyst Matt Murphy with Tudor Pickering Holt & Co. says his numbers show bitumen realizations were still slightly positive on Monday — albeit barely, at a little less than a dollar per barrel — because the price of condensate that many producers use as diluent has also tumbled.

Neither set of calculations include the cost of transporting the crude - Murphy says just the cost of sending the oil by pipeline from its source in northern Alberta to the marketing hub at Hardisty in central Alberta would put almost every barrel in the red.

The analysts agree the low returns mean oil companies will be trying to throttle back production wherever they can over the next weeks.

Dunn estimates the curtailments will total a "few hundred thousand barrels per day," but the technical hazards of shutting down and restarting steamed oilsands wells means bitumen will continue to be produced at a slower rate.

U.S. benchmark West Texas Intermediate oil traded as low as US$19.85 per barrel on Monday morning.

“Given the current futures market for differentials and FX (exchange rates), we estimate the majority of non-upgraded bitumen production in Alberta (1.5 million barrels per day in 2019) requires high-US$20s per barrel WTI to cover variable costs, and an additional approximately US$2 to US$5 higher if we include sustaining capital requirements,” said Dunn in a report.

This report by The Canadian Press was first published March 30, 2020.