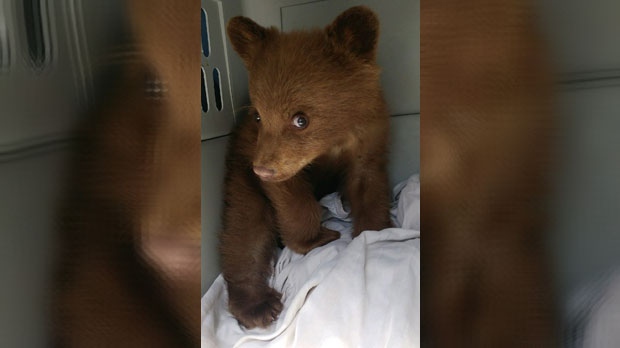 An orphaned black bear, found in southwestern Alberta on Wednesday, is now in the care of wildlife experts in Cochrane. (Alberta Environment)

For the first time since Alberta updated the policy in regards to rehabilitating orphaned animals, wildlife officials have found their first candidate for the program.

A brown black bear was found abandoned in southwestern Alberta by Fish and Wildlife officers on Wednesday.

Officials say the animal was likely left behind by its mother because of its small size and poor condition.

The policy, that originally prevented orphaned animals found in the wild from being rehabilitated within the province, was changed in mid-April.

The update was in response to an incident where three young black bears, found in a bathroom in Banff, were taken to Ontario for rehabilitation.

Under the new policy, wildlife facilities would be able to accept an orphan bear if it is less than a year old. The bear would undergo an assessment and would be released back into the wild on or before October 15 of the same year that it arrived at the facility.

Wildlife organizations would not be able to keep the animals over the winter and they would need to follow certain requirements regarding feeding, shelter, vet care and human interaction.

The bear that was found on Wednesday is now in the care of wildlife specialists in Cochrane.