'Our employees are outstanding': Cargill says no one laid off from Alberta facility

CALGARY -- After the union representing 2,000 Cargill employees at the High River meat production facility claimed that half of them had been let go, the company tells CTV News that hasn't happened.

"We have temporary idled the second shift but not laid off anybody at this point," said Jon Nash, president of Cargill Protein. "I can see that there can be some confusion there I guess."

CTV News spoke with employees from the afternoon shift on Tuesday who said they had been laid off. Nash suggests there may have been some miscommunication.

"It’s certainly something we’ll work to clarify – that’s definitely not the intent," said Nash. "Our employees are outstanding."

The company says, due to a major outbreak of COIVD-19 in the High River area and at its High River plant, many of its staff are being isolated.

"With a number of people that are sheerly not available to come to work at the moment, we would have jobs for folks who would want to be there," said Nash.

"The way we’ve tried to position this is for our people that if they are healthy, and available to come to work and want to come to work we’d love to have them there. We have a lot of work to do."

The company says it does not have an update on how many employees have coronavirus from the 38 confirmed on Monday but Nash believes it could get worse.

"Certainly I would expect to have more positive tests unfortunately over the coming days," he said.

Dr. Deena Hinshaw says the province is setting up a special COVID-19 testing site at the Cargill site.

AHS says a dedicated assessment centre will be opened in the coming week. Workers will need to book an appointment through AHS's online assessment tool or by calling 811.

Hinshaw added that another meat processing plant insouthern Alberta has also seen an outbreak of cases.

"We have been informed about several cases in Brooks," she said. "I refer to maybe a linkage to that particular plant, local public health is doing an active investigation and working to determine what linkage and what kinds of processes may be required," said Hinshaw.

"So again, this is something that local public health is actively investigating. And I would anticipate more information in the days to come."

Production at the plant has been cut in half. Cargill says it isn't getting as much meat out the door.

Ottawa says Canadians should not worry about a limited supply of meat at the supermarket.

"We are producing much more than we eat in Canada but we're going through a challenging period," said Minister of Agriculture Marie-Claude Bibeau.

"I think our system is strong enough and resilient enough that it will adapt. We might see some differences in the variety and hopefully not but maybe in prices as well."

The province deemed food processing plants essential and vital to continue the food supply to Canadians.

"We absolutely need to be able to feed Canadians, and the last thing we need is food shortage and we are grateful today we don’t have that issue," said Nash.

"I don’t think there’s anything to worry about for Canadian consumers at this point." 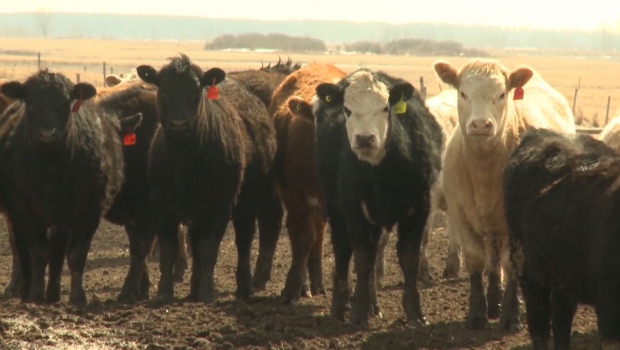 Meanwhile, The Canadian Cattlemen's Association says that Cargill has withdrawn their bids for cattle.

"There's not even an offer on cattle right now," said president Dennis Laycraft, adding that it's likely just a temporary measure.

"Once they get through the inventory that they have in the plant currently then they will start to work into the market."