Pandemic taking a toll on mental health of Calgarians

CALGARY -- A new report is offering a clearer picture of the toll the pandemic is having on the mental health of working Canadians, with 48 per cent reporting they are in need of some form of support.

According to the Morneau Shepell Mental Health Index for October, the decline last month puts the mental health score back to near its lowest point in April. October’s score is -11.4, down from -10.2 in September and closer to -11.7 seen in April.

The score measures increases or decreases from the pre-2020 benchmark of 75. 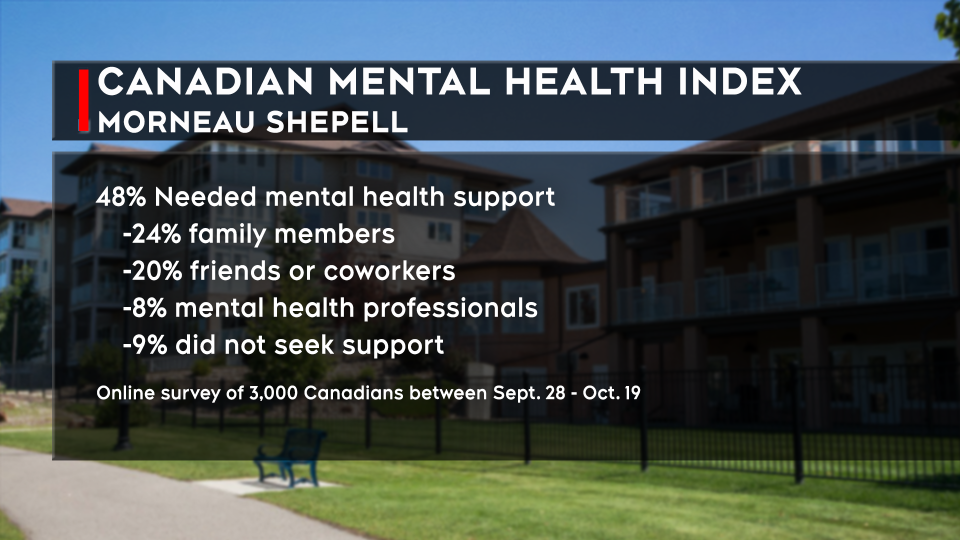 Calgary musician Matt Masters lost all of his gigs and future income with the arrival of COVID-19 in March.

He pivoted by starting “curbside concerts” which offers a mobile performance usually to a client’s driveway — yet he says life continued to be challenging.

“I’ve had a total loss of everything, to a total re-emergence as a successful business person. Then I’ve had this underlying situation of deteriorating mental health because I have been working so much,” said Masters.

This year he suffered a head injury, a minor illness and after months of talk therapy he was recently diagnosed as bipolar.

“I still have a very weird hill to climb but at least I understand that I am climbing a hill now.”

Data from the Distress Centre says he’s not alone.

Suicide related contacts are up 69 per cent in the month of September compared with the same month last year.

In that same time period calls related to anger have increased 115 per cent, anxiety is up by 18 per cent, and domestic violence are also on the rise by 60 per cent.

“We take the mental wellness of Albertans seriously, especially during this pandemic period. To support Albertans, we launched the $53 million COVID Mental Health and Addiction Action Plan early on in the pandemic to ensure people had the support they needed now and in the long-term, including expanded online tools so Albertans know where to get help and virtual supports for contactless services delivery.

We have also provided over 140 grants to mental health and addiction recovery community-based initiatives. If you or someone you know is struggling, know that help is here for you.”

Mental health professionals say the pandemic is largely to blame for many struggles.

“We’re isolated, some of us are fortunate enough to have maintained our jobs even though its different and a lot of people have lost their jobs. So I’m really not surprised that people are struggling right now,” said Angela Grace, registered psychologist.

Grace says now is an important time to simplify life and make sure basic needs are met, and taking a break from social media can also be helpful.

The Morneau Shepell survey also said the fallout of the American election has added stress to Canadians.

It said four in 10 Canadians reporting it negatively impacts their mental health.

The report cites prolonged uncertainty and information overload contributing to Canadians’ mental strain, adding many are aware the results of the election have economic and social impacts on neighbouring countries.

“There’s a lot of uncertainty in the world right now and I think people look to the U.S. for leadership,” said Cathy Clonts, a Calgary resident and an American-voter who has also volunteered for democratic campaigns in 2016 and 2020.

“There were questions about whether this democracy was at risk, (and that has) worried people around the world.”

Masters is taking a break off for the month — and believes that improving mental health is a worthwhile process.

“When we talk to each other and more importantly listen to each other then there is a real opportunity for us to get through these hard times together.”

The monthly survey was conducted online from Sept. 28 to Oct. 19 with 3,000 respondents in Canada.