Conducted for the Global Petroleum Show by Janet Brown Opinion Research, the poll suggests the UCP have 53 per cent support, followed by the NDP at 34 per cent, the Alberta Party at eight per cent and the Liberals at four per cent.

Support for the two leading parties is split between the province’s two major cities, with the UCP leading the NDP by 21 points in Calgary and the NDP leading the UCP by seven points in Edmonton.

The UCP’s strongest support is in rural areas, where they have a 43 point lead over the NDP with 66 per cent support compared to 23 per cent.

The poll suggests the economy and energy industry are the two major issues for voters, followed by jobs, health care, education and government spending. 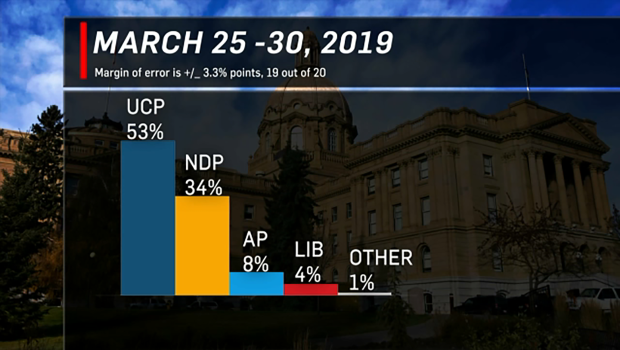 “His plan will hurt people. It will do nothing to diversify the economy and it will mean big cuts to education and healthcare. It will leave Alberta behind,” she said.

“Mr. Kenney wants to give a $4.5 billion tax cut to shareholders and big profitable companies and at the same time he wants to cut overtime pay for regular, working people.

“A carrot for those at the very top and a stick for workers.”

Speaking in Edmonton on Wednesday, Kenney announced that if elected, he will create an Aboriginal Opportunities Corporation to help First Nations in Alberta benefit from major resource projects.

“First Nations people have a long tradition of trading and of economic development, but sadly, in the last 150 years that entrepreneurial spirit was stifled by the Indian Act and government regulation,” he said.

“We need to work with First Nations communities to ensure they have the resources they need to unleash that entrepreneurial spirit. And we also need to recognize that reconciliation needs to be about more than words and symbols, it needs to be about substance.”

Notley also took aim at Kenney for his support of Drayton Valley-Devon UCP candidate and former education critic Mark Smith, who has received intense criticism for remarks made during a 2013 sermon.

On Tuesday, a snippet of audio surfaced on social media that was posted on the website of the Calvary Baptist Church in Drayton Valley.

In it, Smith is heard questioning how anyone who has an abortion could say it's done out of love.

He also discusses how TV programs try to convince people that love among homosexuals is "good love."

"Heck, there are even people out there, I could take you, I could take to you places on the website I'm sure, where you could find out that there's, where pedophilia is love," he said in the recording.

Smith issued a statement on social media Tuesday saying he doesn't recall making the remarks, but said, "I did not say that love between same-sex couples was not love. I merely remarked on media commentary.

"That said, I regret how my commentary was framed at the time," he wrote.

"Of course I do not believe that homosexuality is akin to pedophilia. I unequivocally apologize if anyone was offended or hurt. Obviously that would never be my intention.

"Our leader and party have been clear. It doesn't matter who you love or how you worship. All are welcome in our party and I am fully supportive of that."

Kenney was asked Wednesday how his party will make amends with the LGBTQ community.

“They’re right to feel those comments were hurtful, I think they were hurtful, they were offensive and I condemn those remarks that [Smith] made before his election to the Legislature,” he said.

“Mr. Smith has apologized for those remarks … and I hope that Mark will reach out to members of the LGBTQ community to get into a dialogue.”

A leaders debate is set for Thursday from 5:30 to 7 p.m., which will be moderated by CTV Calgary's Tara Nelson.

The provincial election is set for April 16.