For the first time since 2019, Justin Trudeau is in Calgary where he is expected to make a transit announcement but Premier Jason Kenney and Mayor Naheed Nenshi have more pressing issues in mind.

Trudeau began his day with a visit to AAA Doors Ltd. in northeast Calgary, a business that received pandemic-related support from the federal government. 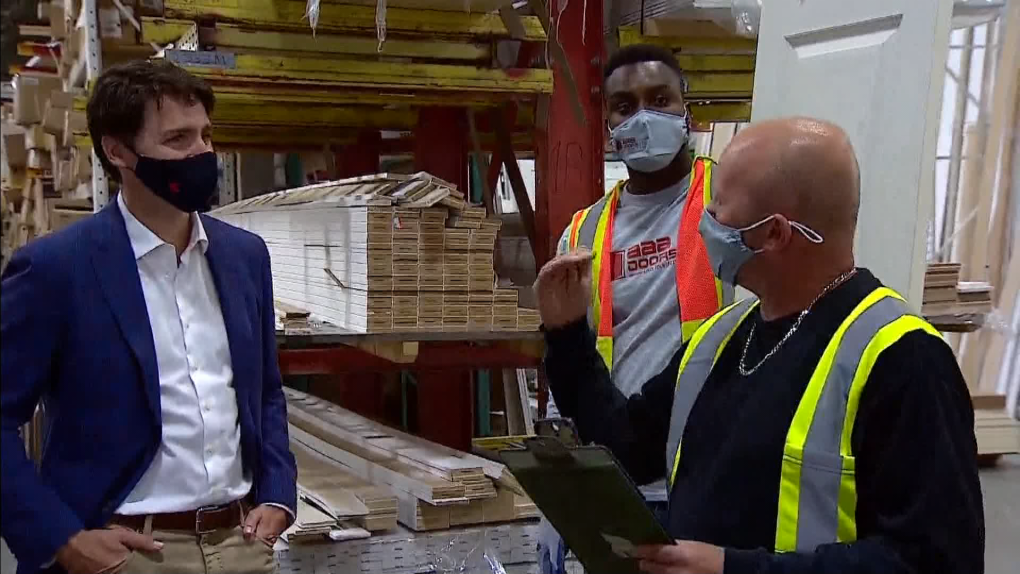 Prime Minister Justin Trudeau speaks with staff at AAA Doors Ltd., a Calgary business that received federal support during the government, on July 7.

"It's great to be back in Alberta, a great opportunity to sit down to chat with Jason," said Trudeau ahead of his meeting with Kenney. "The premier and I have had many, many, many, many calls over the past year-and-a-half because of the pandemic, but (also) on a broad range of things. (It) really has been a time where we've been working together as a federation, I think with excellent results.

"I know you're looking toward Stampede very positively and Albertans are feeling pretty good about things. So we're going to keep being there to work together and make sure that people are safe on rebuilding, lots of investments, lots of opportunities to get our economies going even stronger in the coming years."

Kenney welcomed Trudeau back to Alberta and was quick to mention the current plight of the local tourism and travel sectors.

"Nice to be able to welcome you back to Alberta as soon as we started to get some more domestic travel going," said Kenney. "And I do hope to talk to you about that, how we can help the 800,000 workers in the travel and tourism industries get back to work."

Kenney commended the different levels of government for temporarily parking politics and focusing on public health amidst the crisis, before lauding Alberta's pandemic response.

"Prime Minister, I can tell you that Albertans have really risen to the challenge. We're crushing COVID here, and such that we're able to fully open and we're looking forward to celebrating all of that with the Calgary Stampede here starting later this week," he said.

"We really can see Alberta is leading Canada out of the pandemic but also, we hope, in economic growth this year. So yes, you know, we've been through five tough years and we were hit harder than any province because of the energy price collapse on top of everything else last year as you well know. But a lot of projections suggest we're going to lead the country and growth and I look forward to talking to you about ways that we can make that happen so Albertans who have been unemployed or underemployed for a few years can get back get back to work and I sure hope we can find common ground on that growth agenda." 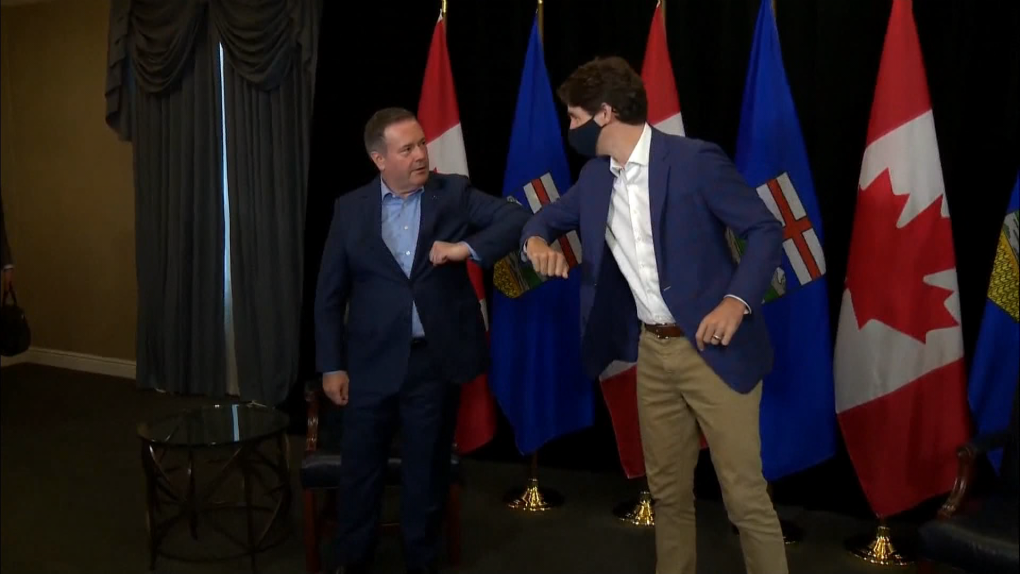 Prime Minister Justin Trudeau and Alberta Premier Jason Kenney exchange an elbow bump instead of a handshake ahead of their meeting in Calgary on July 7.

KENNEY HAS MORE ON HIS MIND

A spokesperson for the premier's office says Kenney wants to discuss pipelines and the reopening of international borders that have been closed due to COVID-19.

Press secretary Jerrica Goodwin says the premier plans to bring up a fair deal for Alberta in the federation among other issues. 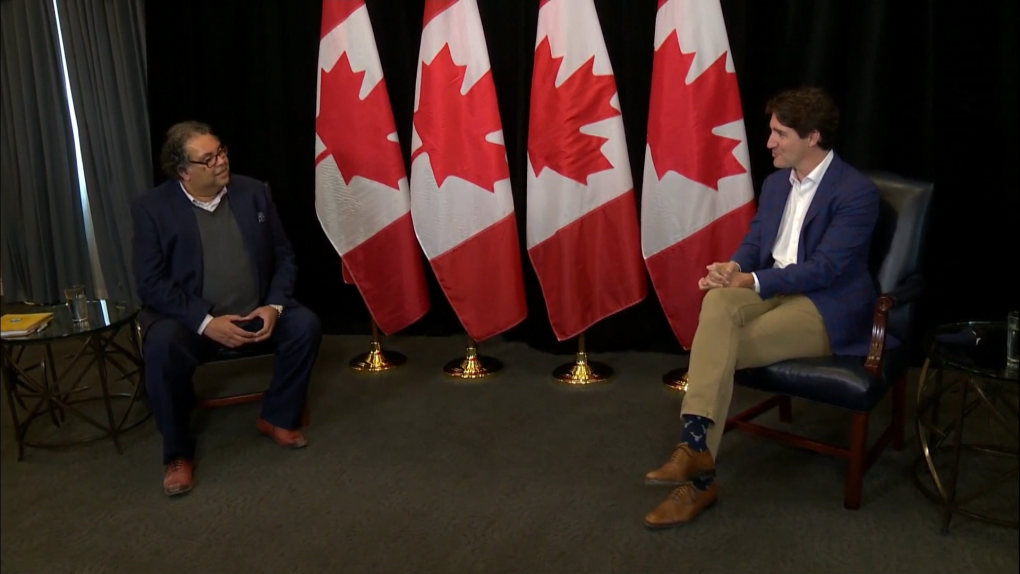 Calgary Mayor Naheed Nenshi and Prime Minister Justin Trudeau address the media ahead of their July 7 meeting in Calgary.

Prior to his meeting with Calgary's mayor, Trudeau took a moment to commend Nenshi on his ongoing commitment to Calgarians despite the fact he will not seek a fourth term.

"Your ambitions for the city and your care for the people of Calgary continues right up for the last minute. It's always such a pleasure to be working with you and and connecting on how we can continue to work together for Calgarians."

Nenshi says there's a lot to do in his final three months as mayor.

"(There are) lots of things to press you on," Nenshi told the prime minister ahead of their meeting. "We are in a good place with the pandemic and I think that we are in a position of real optimism, where we can start thinking about what our new community looks like.

A small group of protesters gathered across the street from the hotel ahead of Trudeau's arrival. 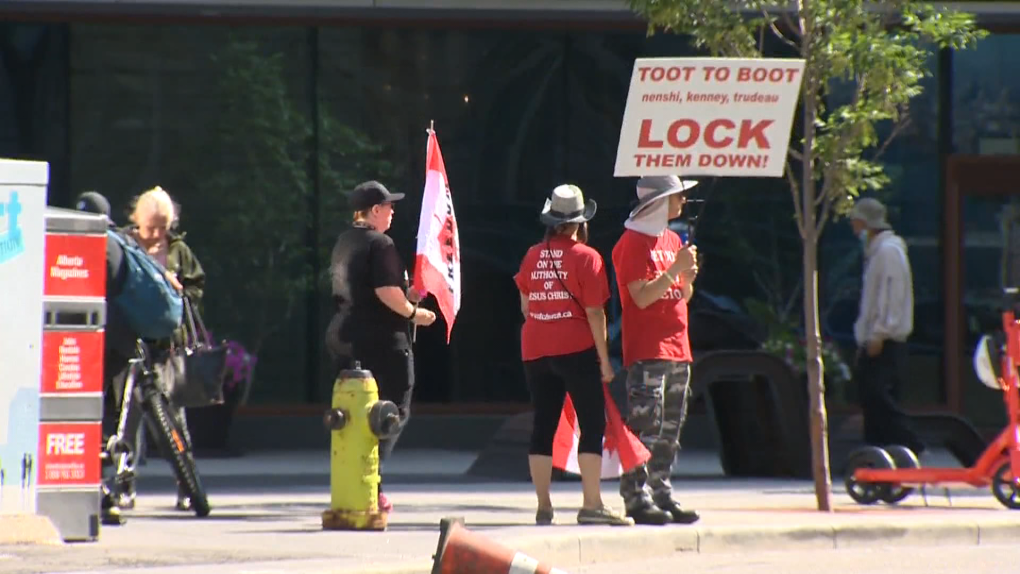 A small group of protesters gathered across the street from the Palliser Hotel in downtown Calgary during Prime Minister Trudeau's visit to the city on July 7.

The prime minister is slated to make a transit announcement at the Calgary Transit Oliver Bowen Maintenance Yard Wednesday afternoon.

Trudeau was in Saskatchewan Tuesday signing off on a child welfare agreement worth tens of millions of dollars on the Cowessess First Nation.