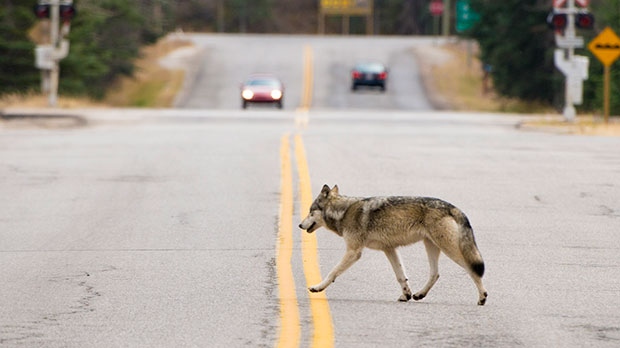 A wolf is seen near the Town of Banff in this file photo. Parks Canada staff have put down two wolves recently due to their bold behaviour. (File photo)

CALGARY -- A second wolf has been put down by Parks Canada staff following reports the animals were displaying "human food conditioning" behaviour.

The first wolf killed, a young male found to be in poor condition, had been seen around the Sunshine Village Ski Resort and was killed last week. The wolf was killed while a warning was in place and several campgrounds were closed in the Healy Creek, Egypt Lake and Pharaoh Creek areas.

That's where a wolf had been spotted approaching campsites and even taking items from a tent.

Parks officials later found an illegal fire in the area, which appeared to have been used for cooking, as grease and fat was also found nearby, along with bits of garbage. The animal wasn't captured but items the wolf had chewed were gathered and samples sent to a lab, which officials are hoping will yield DNA that can be matched to the wolf that was put down, said resource conservation manager Bill Hunt.

In a third incident, a wolf was also spotted around the Banff townsite.

"In the following days it was seen in Harvie Heights and in Canmore as well then back in Banff again," said Hunt. "So this animal was moving up and down the Bow Valley, very comfortable in residential areas, so it was very concerning."

That wolf was again spotted July 9 by Parks Canada staff, who followed the elderly female and captured her.

"She had scars on her legs consistent with fighting with other wolves, so she may have been a dominant female in a pack somewhere and then been usurped by a younger female and kicked out of the pack. That's typical behaviour we see in an animal that age so she's just struggling," said Hunt.

As a result, the animal was put down.

Hunt said it is "very concerning" to see food and garbage left in campsites, which attracts wolves and other animals.

"It's absolutely critical that any food, garbage even toiletries, are properly stored when not in use," he said.

Lockers have also been installed at backcountry campsites so people have a place to store items safely.