Should people get to choose which vaccine they receive in Alberta?

CALGARY -- As Health Canada approves more COVID-19 vaccines, some people are hoping to get to choose which one they get when it's their turn in Alberta.

Consensus from medical professionals is that people should get any of the approved shots as soon as possible and as soon as they are eligible.

There are differences in the reported efficacy of the vaccines, it just may not matter as much as you think, according to Dr. Craig Jenne, an infectious disease specialist and associate professor at the University of Calgary.

"The differences with the vaccines are actually quite difficult to capture. That's because when clinical trials were conducted, they were not conducted exactly in the same fashion," Dr. Jenne said.

Different populations were part of different trials and they were conducted at different times, too. The effectiveness of each vaccine isn't an apples to apples comparison, he says.

"As you can imagine vaccines that were tested in early 2020 likely did not experience many of these variants. Whereas vaccines tested later in 2020 or even into early 2021 generating clinical trial data were now testing the efficacy against variants," explained Dr. Jenne.

Canada has approved four vaccines, three of which have arrived here in Alberta.

The Pfizer and Moderna vaccines both have an efficacy rate of more than 90 per cent. The AstraZeneca vaccine, which will roll out to Albertans this week, reduces transmission of the virus by about 60 per cent and is around 80 per cent effective in preventing severe illness or death. All three require two doses. 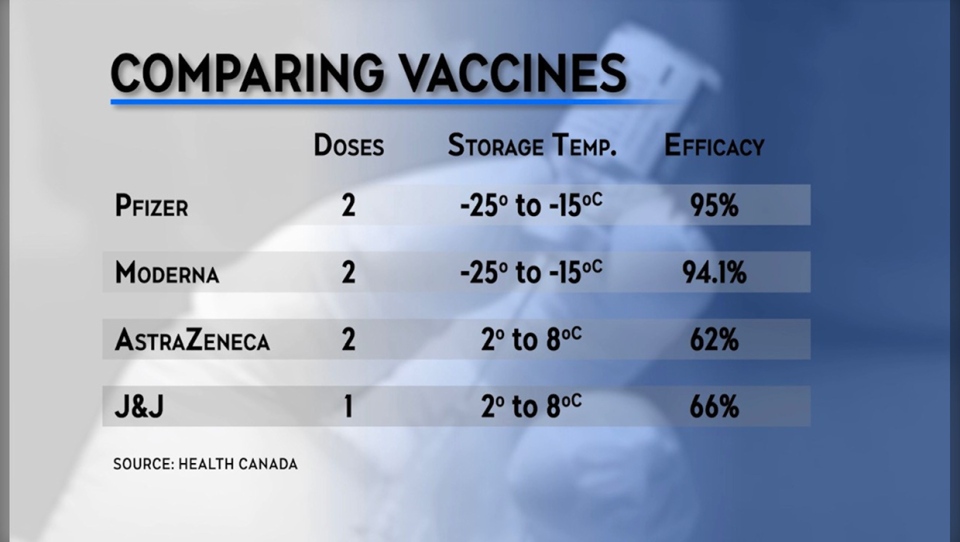 The Johnson and Johnson vaccine was approved on March 5 and requires just one dose to achieve 66 per cent efficacy after at least two weeks.

"All four vaccines in Canada prevented all deaths (during trials). So nobody vaccinated in these clinical trials succumbed to the infection on any of these four vaccines," Jenne said.

"From a functional point of view, from the efficacy on the ground, these vaccines are very comparable to each other."

NO CHOICE FOR ALBERTANS

Alberta does not have a plan at this time to allow people to choose which vaccine they get -- Dr. Deena Hinshaw recommends people get vaccinated as soon as they are able to -- but some people hope that option exists by the time they're eligible.

"I think people should be able to choose because of the fact that... (it should be) whatever they are comfortable with," said Calgarian Isaac Ojewole, who is waiting to be eligible for the vaccine.

He said he'll take whichever is available when it's eventually his turn, but has a preference if given the option.

"The reason that I want to wait for Johnson and Johnson is because it's only one shot," he said. "You don't have to wait, like, four months in between."

Vaccination appointments for Phase 2 begin Wednesday at 8 a.m. Two groups will be eligible to receive the AstraZeneca by booking online or by calling Health Link at 811.

Those eligible to book first are Albertans born in 1957 and First Nations, Métis and Inuit people born in 1972.

Booking will continue for Albertans born in 1958-1971 in the following days, one year at a time, depending on availability.

"Where this vaccine seems to differ is in preventing asymptomatic infection, which means reducing the spread of COVID-19," Health Minister Tyler Shandro said Thursday.

Alberta is not using the AstraZeneca vaccine on people who are at a higher risk or people over the age of 65.