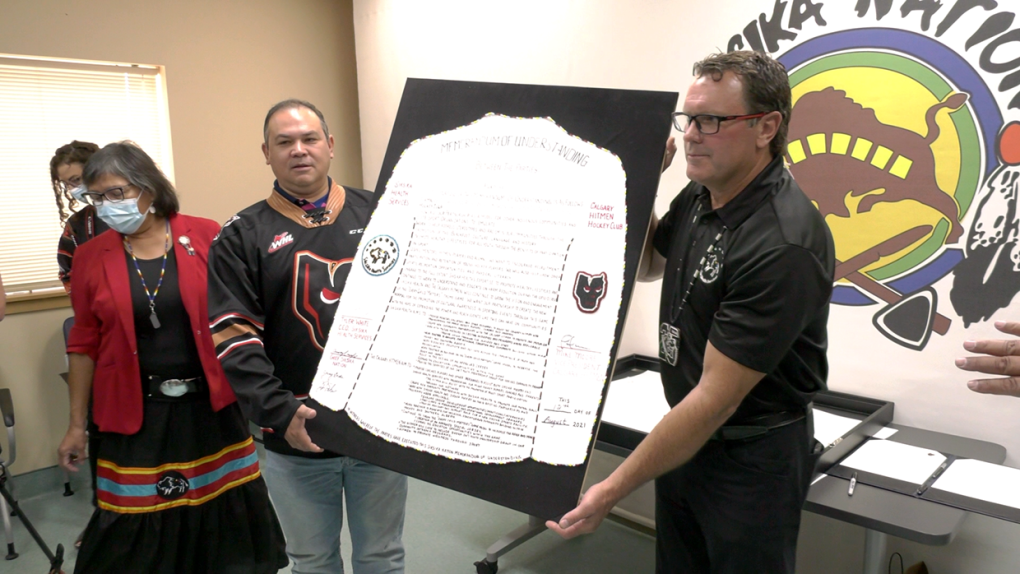 Chief Crowfoot also touched on the MOU serving as a broader link for Siksika to forge deeper ties with the city of Calgary.
CALGARY -

In a historic first, the Calgary Hitmen have united with Siksika Nation to formalize a working relationship between the two parties.

Presented as a Memorandum of Understanding (MOU), the two sides outlined the details of the partnership in front of a large gathering at the Siksika Health and Wellness Centre Thursday.

Among its many stated objectives, the MOU is oriented towards community education, leadership and the promotion of Blackfoot culture.

Being the first of its kind, the MOU is also striving to be seen as a model for other Indigenous communities and professional sports organizations to emulate.

"We have further plans to co-develop an outside skating rink, among other projects," said Chief Ouray Crowfoot of Siksika Nation. "But sports isn't always about what happens on the court or on the ice, it's the character that you build from teamwork, a sense of pride, learning how to be a champion and a leader, it's all those things that teach you about life," added Chief Crowfoot.

"In this relationship with the Hitmen, we see it as one avenue to help build those life skills for our children." 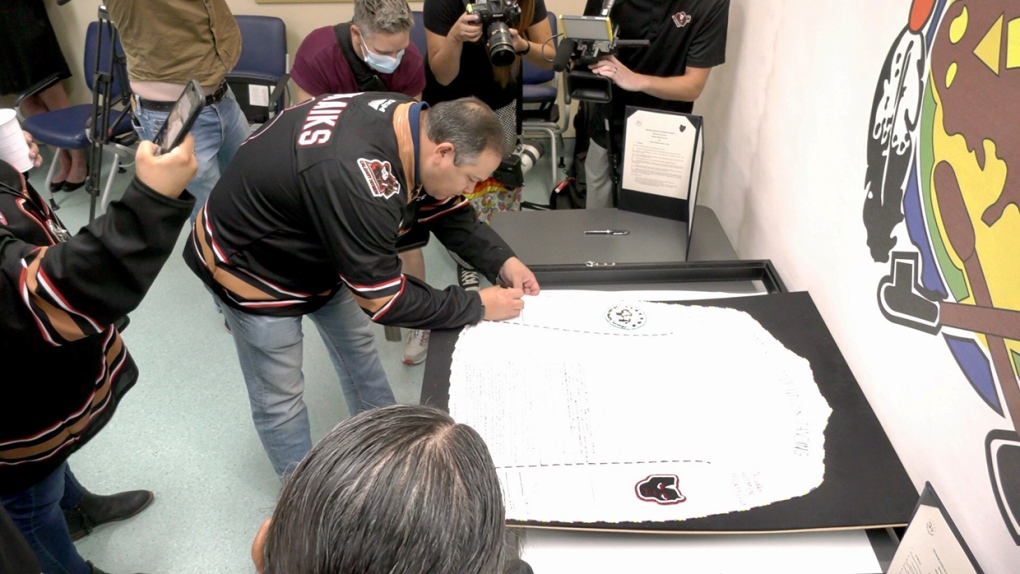 Chief Crowfoot also touched on the MOU serving as a broader link for Siksika to forge deeper ties with the city of Calgary.

"This will also contribute with our relationship with Calgary. There wouldn't be a Calgary if it weren't for the Blackfoot; they built Fort Calgary and the Siksika have been in the area long before there was a Calgary."

"It's important for organizations like the Hitmen to recognize we are here together on Blackfoot territory, and form a relationship oriented towards working together."

The MOU will also provide for a broad range of programs and shared experiences such as mentor-ship, speaking engagements and educational programs focussed on cultural beliefs.

"There is so much to be offered between both communities, a lot of work has gone into this but there is a lot of work ahead of us to do good things together," said Mike Moore, VP of the Calgary Hitmen.  "The MOU represents those opportunities, and to do them together," added Moore.

From the Hitmen's standpoint, the MOU primarily serves as a pathway to education on Indigenous culture and traditions, but sport will play a significant role in the relationship. "Using sport to create health and wellness, and using it to help guide youth to a better future, that's an important part of this partnership," said Moore.

As a centrepiece of the MOU, the outdoor rink to be constructed in Siksika is currently in the design stage, and the Hitmen are slated to play a preseason game at the Siksika Deerfoot Sportsplex on September 18.