Summer starts at 9:54 a.m. today, but nobody told our forecast.

Environment Canada issued a rainfall warning for Calgary and parts of southern Alberta and the city could see between 50 and 80 mm of rain inclusive with totals that started to build late Thursday evening.

Officials say rain will be heavy at times and local accumulations could exceed 100 mm in the Bow Valley region.

The low pressure system is expected to move out of the foothills and Calgary area by the evening.

Localized flooding is possible in low-lying areas and some flooding has been reported west of the city. 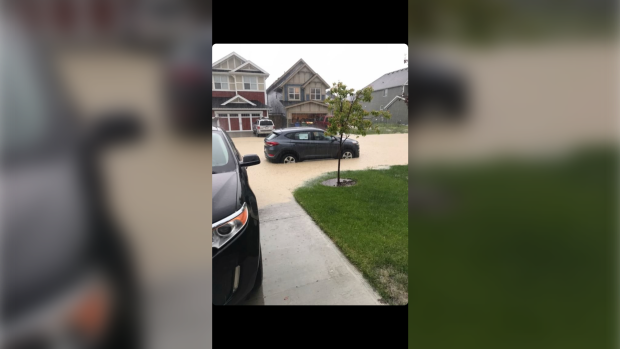 CTV viewer Michelle C. sent in this image of flooding in the Sunset Ridge area of Cochrane.

The province issued a high-streamflow advisory for the Bow and Elbow rivers on Thursday morning and the city is advising against all boating and watercraft activities on both waterways.

Calgary Mayor Naheed Nenshi posted a tweet saying that water levels in the Glenmore Reservoir are being brought down.

I just spoke with the Calgary Emergency Management Agency regarding the rainfall warning.

Glenmore Reservoir is being drawn down to allow for upstream accommodation.

Elbow River will be running high (80m3/s) but will stay below significant overland flooding levels.

The Town of Canmore released a statement on its website saying that 28 mm of rain fell in the centre of town on Thursday evening and that 34 mm of precipitation (rain and snow) was recorded at the Cougar Creek weather station.

Officials said in the post that the water levels in the Bow River are ‘well within the seasonal range’ at 120 m3/s, which was recorded in Banff.

We'll be keeping an eye on rainfall totals and basin levels throughout the day.

For the latest on road conditions in Calgary, follow  YYC Transportation on twitter or check the CTV Calgary Traffic Page HERE.

(With files from Kevin Stanfield)