CALGARY -- Dinosaur Valley Studios is known worldwide for its work in creating life-like full-size replicas of prehistoric creatures. Its new project is also one of its most challenging.

Typically staff work with fossilized bones that are millions of years old.

But for the next three months, they’re working on mounting a complete orca skeleton to a steel structure that will make the bones look like they’re swimming in the ocean.

The carcass was discovered near Courtenay B.C.. The president of the studio said they received the bones three weeks ago.

“These are the actual bones we’re dealing with," studio president Frank Hadfield said. "Not casts that come from moulds, so it’s the real deal.

"We can’t do any damage to the bones at all. This is a research specimen, so we can’t damage the bones in any way: no drilling holes, no gluing, anything like that.”

Eddie Dahm is a paleoartist who spends most of his time working with clay and said this particular project poses a few challenges to position the bones.

To do that,  the team is using a lot of steel.

Hadfield said the trick is to create individual mounts for each bone so they rest in place but won’t fall out. 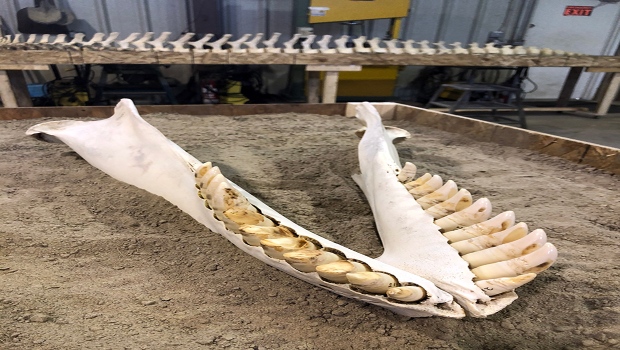 “Every one (bone) has to be in its own little cradle holding it there so the researchers can come and remove it," Hadfield said. "It is part of a traveling exhibit so there’s challenges in that as well, so that it’s easily set up so the technicians can take it and place it in its cradle and it’s in the exact place it should be anatomically,” said Hadfield.

Lori Jolliffee is the project coordinator and spends a lot of time communicating with the museum to keep track any changes required for the exhibit.

“It’s exciting for us to be involved in something like this," Joliffee said.  "It’s B.C.-driven and even the specimens they’re dealing with are directly from areas of the island.”

The plan is to have the project completed by Christmas and sent back to the Royal British Columbia Museum for display.