CALGARY -- A number of residents who live in the southwest community of Bankview likely don't have anywhere to go after a massive fire tore through a condo building Friday afternoon.

Fire crews were called to the five-storey housing complex in the 1400 block of 23 Avenue S.W. at just before 4:30 p.m. after callers reported seeing thick smoke and flames coming from the top of the building.

When firefighters arrived, they immediately called for a second alarm to bring additional units to the scene, but it was soon upgraded to a third alarm given the size and extent of the fire.

All of the residents of the 56-unit complex were able to escape the building safely after someone inside activated the alarm system, fire officials say.

No one was injured as a result and fire crews also rescued a dog and six cats from the units. All of the pets, except for one cat, have been released from the care of veterinarians.

Crews fought to bring the fire under control for over six hours after it began and officials say they are expected to remain at the scene throughout the day on Saturday to monitor the building.

Officials do say all of the hot spots have been extinguished and fencing, as well as security, has been put in place around the building. 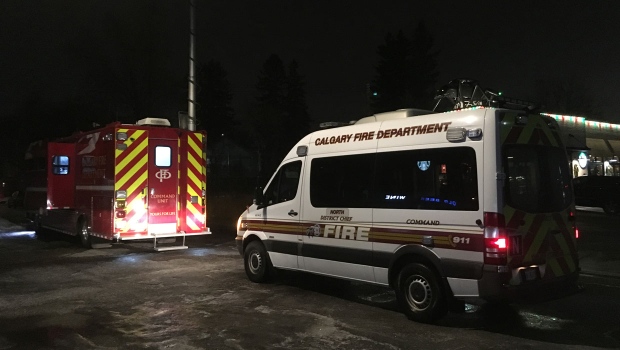 Because of the extent of the fire, officials say it is unlikely any of the residents will be able to return to the building for some time.

"Residents are urged to contact their insurer as soon as possible and to make plans to stay with family or friends. The Red Cross may also be of assistance. The property manager will be sending out regular updates via email to all residents," the CFD wrote in a release.

A number of businesses and residents in the City of Calgary have also stepped up in the wake of the fire to offer places for displaced residents to live and spend the holidays.

One Calgary-based developer even said it had three vacant homes it would be making available for anyone who needs them.

PLEASE HELP BY SHARING THIS!!! Hello all friends and fellow Calgarians as some of you may or may not know there has been a huge fire in a fully occupied condo building by Bankview in Calgary tonight. I am an inner city developer and we currently own a parcel of land that we are waiting to start construction on. Currently I have 3 vacant homes/suites that I am offering up rent free for a couple months to 3 families or person that is now left homeless by this catastrophic fire. Me and my team will help get you set up, we can get the homes temporary furnished with Christmas tree and all for this Christmas Eve move in. We hope this message reaches the families and people affected by this fire as we wish to help these people still have a Christmas. Please contact President Brett Taylor on his cell at 403.992.1157 or email at brett@redtreeprojects.ca to learn more. Note; families with small children are served first. Merry Christmas all! @yycnow #yyc

Fire officials are at the scene to determine the cause of the fire, but they will first have to determine if the building is structurally safe to go into before that work can begin. There is no estimate on the amount of damages sustained to the building.

Anyone with information about the fire, including videos and photos taken prior to the CFD's arrival, are urged to send them to piofire@calgary.ca to aid in the official investigation.