A clean-up company hired by a family to help out with a move came across a prehistoric surprise when they discovered dozens of boxes of fossils.

The fossils, that include bones of all shapes and sizes as well as petrified wood and many others, were all apparently collected by the homeowner over a number of years in southern Alberta.

Mike Darbyshire, the owner of JUST JUNK in Calgary, says his team was called by a family who was helping their uncle move out of his home.

He says his team did find some of the fossils as soon as they arrived.

“We did see a couple of dinosaur bones when we went into the property and I asked him. He told us that he just used to go look for bones,” he said. “He told me he used to go to places like the Oldman River and other places and just look for bones. He used to pull out some pretty interesting stuff.”

When Darbyshire and his team ventured further into the home, they found even more pieces.

“When we got down into the basement, we found boxes and boxes of pretty substantial dinosaur bones ... they're pretty neat, they were mostly intact.”

He estimates there were thousands of fossils inside the home, all stored in boxes.

Darbyshire has already been in contact with the Royal Tyrrell Museum in Drumheller and plans to take the collection to the facility on Friday. He says workers there are glad to receive them.

“They’re happy that we’re taking them to them, obviously, this is all part of Alberta’s history and heritage. So he’s ecstatic. They find big things all the time and big dinosaurs all the time … I’m not sure they know how many I am taking there.”

Darbyshire has also spoken with the family to tell them about the plans and says they are happy the fossils have found a home.

“He did assure me that he thinks his uncle will be very happy that that’s where they are going to go. He spent a long time collecting these fossils and digging for them I guess.”

While Alberta's palaentological resources, or fossils, are protected under the Historical Resources Act, experts say it's  a matter of permission about whether or not any wrongdoing took place.

“When it comes to excavating fossils, the Alberta Resources Act came into place in the early 1970s, and in order to excavate fossils or dig up fossils from the ground, you need to have a permit," says Darla Zelenitsky, an assistant science professor at the University of Calgary.

She says Albertans are allowed to collect fossils from the surface as long as they are on private land and have a permit to do so.

Zelenitsky says the fossils, since they were found in Alberta, still remain property of the Alberta government and will be kept in the province for all residents.

Officials from the Royal Tyrrell Museum have refused to make any comment on the find. 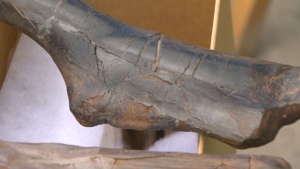