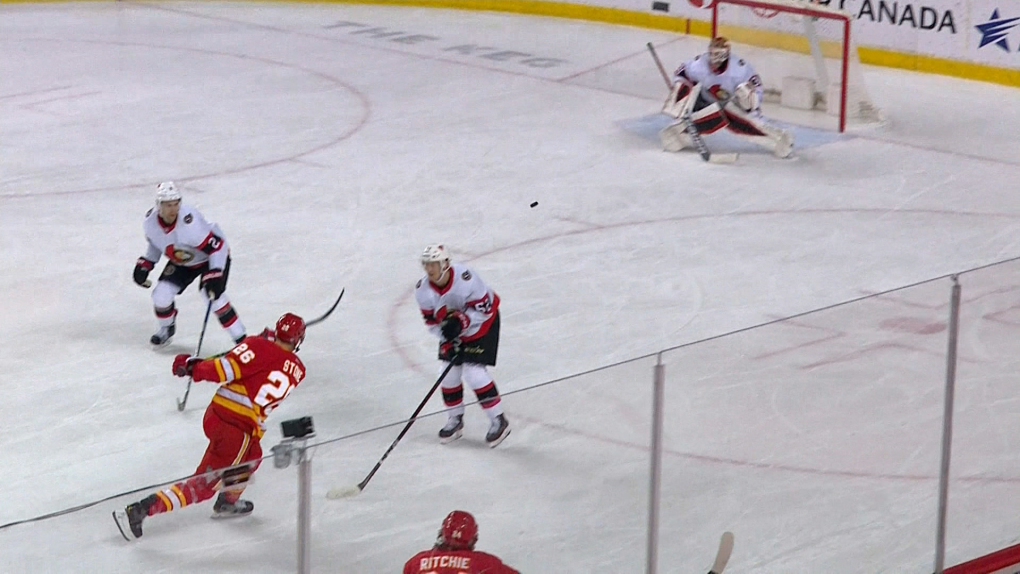 CALGARY -- The Calgary Flames kept their slim playoff hopes alive with a 6-1 victory over the Ottawa Senators on Sunday night.

The Flames are eight points behind Montreal for the fourth and final playoff spot in the North Division. To make the post-season, Calgary would need to win its remaining four games against the division-worst Canucks and the Canadiens would need to lose both of theirs in regulation versus Edmonton.

Josh Norris scored the lone goal for the Ottawa Senators (22-28-5), who lost in regulation time for just the second time in 11 games.

Anton Forsberg gave up four goals on 23 shots. He was replaced by Filip Gustavsson, who made 11 saves in relief.

Knowing they were facing elimination, the Flames played desperate hockey from the opening faceoff.

After Gaudreau hit the post in the opening minutes, the Flames winger would not be denied on his next opportunity. On a fast break, Gaudreau took a stretch pass from Giordano right on the tape and slid a delicate backhanded shot between Forsberg's pads while falling to the ice at 10:39 for his fourth goal in his last six games.

Meanwhile, the Senators, who were coming off a 4-2 win over the Winnipeg Jets on Saturday, could not generate any offence in the first. They went more than 15 minutes without firing a puck on Markstrom and were outshot 10-3.

Calgary opened the floodgates in the second period, scoring three more times by the halfway mark.

Backlund put the home team up 2-0 just 17 seconds into the middle frame to cap off a good cycle play in the offensive zone.

The Flames added to their lead at 4:38 when a patient Gaudreau found Tkachuk in the slot for his first goal since Apr. 2.

At 10:05, Calgary scored a fourth goal on its 23rd shot when Stone's slap shot from the point blasted past Forsberg, chasing the Sens netminder from the game.

Gustavsson started the contest on the bench following his 27-save performance on Saturday.

That goaltender change may have briefly sparked the visitors as Norris scored a minute later on a beautiful backhand pass from Drake Batherson.

But the Flames added two more in the third period to put the game out of reach. Dube sealed it on the rush with a one-timer at 6:45 before Giordano made it 6-1 at 13:53.

Calgary finished 3-5-1 against the Senators this season.

This report by The Canadian Press was first published May 9, 2021