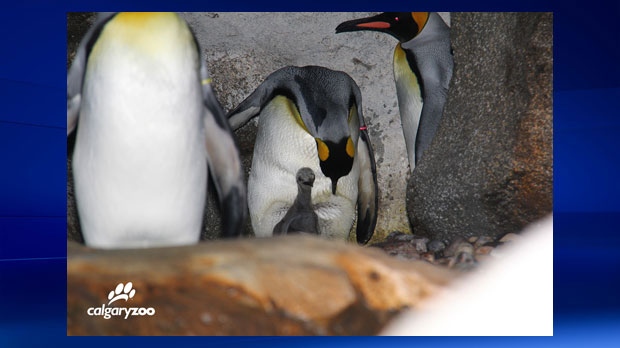 Three weeks after its hatching, the youngest resident of the Calgary Zoo’s Penguin Plunge enclosure made its public debut on Thursday.

The unnamed chick was born on August 1 and has remained under the care of its parents Diana and Arthur. Zoo officials have not confirmed the chick’s gender.

“This new addition has been very positive for the dynamics of the king penguin colony,” said Dr. Malu Cell, Calgary Zoo curator in a released statement. “Anytime a chick successfully hatches is a celebration as it adds one more individual for this at-risk species.”

The hatchling is the sibling of Nero who was born at the Calgary Zoo in 2015 and recently celebrated his second birthday.

2017 has been a busy season for the Calgary Zoo's penguin colonies. In May of this year, the zoo welcomed two Humboldt penguin chicks. A gentoo penguin chick hatched on June 19."