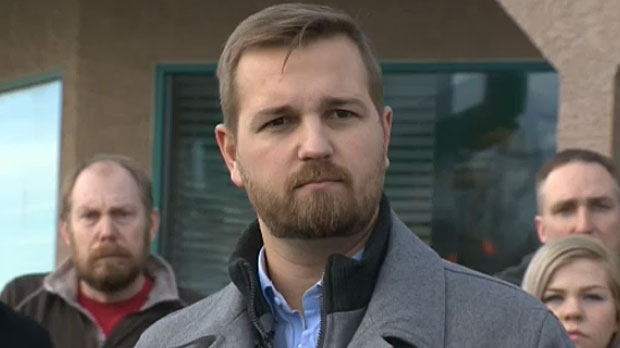 Derek Fildebrandt announced on January 26, 2015, that he would be seeking the Wildrose nomination for the riding of Strathmore-Brooks.

The Wildrose Caucus has agreed to lift the suspension for MLA Derek Fildebrandt who was benched after getting caught up in a controversial post on social media.

The Strathmore-Brooks MLA was suspended from caucus on the weekend after the Wildrose said he made an ‘unacceptable comment’ on Facebook that did not ‘represent the values of the Wildrose Caucus.’

The suspension came after a comment was posted on Fildebrandt’s Facebook page by a Strathmore-Brooks constituent who applauded the MLA’s actions during Ontario Premier Kathleen Wynne’s visit to the Legislature last week. The constituent referred to the NDP as ‘No Damn Profit idiots’ and Ontario’s premier as ‘Mr Wynne or whatever the hell she identifies as’.

In a statement on Monday, Wildrose Leader Brian Jean said that Fildebrandt accepted the suspension and apologized to Albertans.

“We believe that Derek recognizes that he has had a long series of missteps on social media. His latest comments on Friday night unfortunately conveyed a sentiment that is inconsistent with the values of our caucus, and frankly, inconsistent with Derek’s values,” said Jean. “Since Friday night, Derek has apologized to Albertans on this issue, and I thank him for that apology. We know that it is a mistake that he deeply regrets and we know that it in no way reflects his personal values. Members of our Caucus and Caucus leadership have informed Derek of commitments needed to have the suspension lifted. His agreement to those changes would allow Caucus to lift the suspension in the very near future.”

Jean also said that he made it clear to party members that comments like this would not be tolerated and that there would be ‘significant consequences’ for mistakes regarding intolerance.

On Tuesday, the Wildrose released a statement saying the suspension had been lifted.

“There is a clear commitment from Derek to address Caucus’ concerns to be accountable for his track record on social media and to take steps to fix it. Derek has fully accepted Caucus’ concerns and criteria,” said Wildrose Leader Brian Jean. "Derek is an important member of our Wildrose team and we all expect him to have a bright future within our organization. Along with our entire Wildrose team and the broader conservative family, we look forward to Derek joining us once again to work on building a united conservative alternative that invites and attracts Albertans from all backgrounds who believe in smaller government, strong families and safe communities.”

“I’m pleased to rejoin my colleagues and Leader Brian Jean today, and to move forward together. We have important work to do in holding the NDP government to account and standing up for Alberta. We should move forward together as a unified caucus and party behind the leadership of Brian Jean, with a focus on serving Albertans," said Fildebrandt in the statement.

The Wildrose says Fildebrandt has agreed to “better handle and control social media” and that a social media manager will be hired to handle public interactions.