While many Calgary doctors would like to see all restaurants closed to indoor dining, at least one planned to be Monday night.

After more than 30 complaints about Without Papers Pizza failing to require vaccination documentation, AHS suspended its food handling permit.

As late as Sunday night, the restaurant posted a sign promoting the fact that customers would not be checked for proof of vaccination.

For businesses in compliance, such as Ollie Quinn next door to the pizza joint, the restaurant's policy was a headache they couldn't shake.

"It was not a very comfortable situation for anyone besides the people that were at Without Papers," said Ollie Quinn employee Andy Lehman. 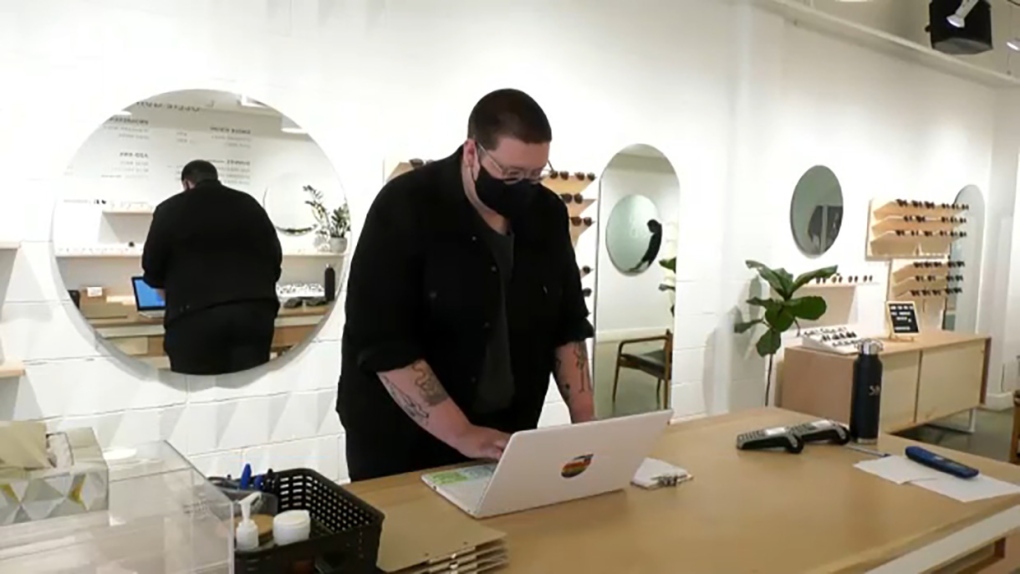 Andy Lehman works at Ollie Quinn next door to Without Papers. He can't understand why there has been no crackdown on Without Papers Pizza

But by Monday, things changed. The sign was gone on the door, the lights were off - and even though CTV News could see movement inside, no one at Without Papers wanted to talk.

Alberta Health Services confirmed it suspended the business's food handling permit Thursday. It's unclear what will happen next.

One expert said flaunting your establishment's bucking the rules amounts a perilous strategy in a pandemic.

"The more high profile you are flaunting the public health restrictions, the more likely it is that you're going to be hammered with a fine," said Doug King, a professor of justice studies.

As of last Thursday, the city said there had only been one ticket handed down for a facility allowing people to enter without providing proof of vaccination.

King said it's possible there are other venues under investigation, but that the due process of enforcing the rules is a long, slow one.

"If they don't follow it, it could end up in a court case and a court challenge where a judge has weighed that you didn't follow your own process," he said.

Alberta Health Services say it would rather focus on education. Those next door at Ollie Quinn say they know from first-hand experience that approach doesn't work with some business owners.

"We have kind of just been scratching our heads wondering why no one has really cracked down on these places," Lehman said.

At five o'clock Monday, Without Papers was closed. The front doors were locked, but CTV News observed staff setting up the patio with signs and umbrellas, and could observe them inside, cleaning the restaurant. There were also a steady stream of people opening the door and leaving, or sitting out front, all of whom said they believed Without Papers would be open again Monday night. It would not be the first business to go against a provincial order during the pandemic.