A temporary court injunction invoked by police did not stop a couple thousand Calgarians from making their voices heard Saturday as 'freedom' protesters continued their fight against remaining COVID-19 mandates.

A large group gathered first at Olympic Plaza around 1 p.m. before marching down Stephen Avenue and ending up at a Harley Hotchkiss Park, which is designated for public demonstrations.

The injunction currently prohibits blocking traffic or operating vendor stands without a permit within Central Memorial Park or other areas.

It also bans excessive noise, including the unnecessary sounding of horns or other audible warning devices. Still, protesters like Mandy Wild say that won't prevent her from making her voice heard.

"The injunction is not okay," she said.

"So, we're just pivoting like Albertans do. You tell us not to do one thing, we'll do another and keep going."

Several protesters confirmed to CTV News that they're concerned with the threat of resuming COVID-19 lockdowns, the potential expansion of vaccine passports, quarantine or testing requirements.

Among those attending the rally was Bradley Dezall, a 'freedom' protester calling for the removal of vaccine mandates that prevent himself and others from obtaining employment.

"I'm not against someone who wants to get vaccinated. I just think it should be a choice and that's really what we're all here fighting for is people's choice to choose their own medical autonomy," he said.

"A lot of people have lost their jobs over this, and a lot of people are in really tough situations right now, families have been devastated and unfortunately, the government who was set up to help protect us is not doing their job and we're just really frustrated over it."

Logan Anderson agrees vaccination mandates have taken away from his quality of life. He was laid off from his job because he was unvaccinated and now can't travel.

"I've got a place down in Phoenix, and I'd love to travel down there because every year I watch spring training baseball. I haven't been able to do that here this year just because I am unvaccinated and I don't think that's right," Anderson said.

"So that's why I'm here. We're not breaking any laws, I want peace, love and unity, and I just want everybody to be together again."

Jacqueline Davidson has been driving oversized trucks for the past 12 years. She's double-vaccinated but still concerned about her privacy.

"We're supposed to show our QR code when we arrive at the border on our phone, but the border tells us that it already pops up on their computers 20 minutes before we get there without warrant or even asking for permission to come into the country," she said.

"I just think that's wrong. It's a privacy issue. Some people can't get the vaccine for medical reasons, and why should they lose their job when they've been doing this for two years safely?" 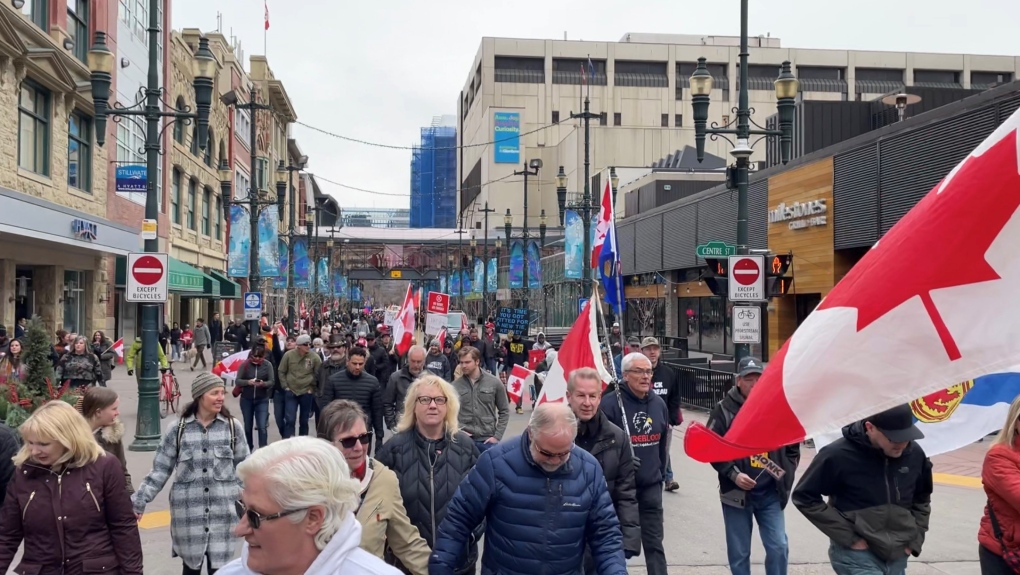 POLICE CONTINUE TO RAMP UP ENFORCEMENT

Calgary police officers were kept busy throughout much of the afternoon Saturday responding to demonstrations at City Hall, Harley Hotchkiss Park and Prince's Island Park, but most protesters were peaceful.

As of 3:30 p.m., police had only arrested one person for breaching the injunction and handed out several tickets to the drivers of vehicles downtown excessively honking their horns in relation to demonstrations.

Police Liaison Teams say they have continued to engage with protest organizers and ensure their awareness of the current injunction conditions, which were primarily met across all three protest areas.

Officers monitored groups as demonstrators walked from Harley Hotchkiss Park back towards City Hall and noted that injunction rules were being abided by.

In addition, bylaw officers issued one summons for violating the injunction and 25 tickets, including 23 for excessive horn honking, one for illegal drone use, and one for operating a business booth with no licence. One vehicle was towed to the impound lot as it was not registered, police said.

"Further tickets are anticipated based on evidence gathered at the demonstrations," CPS said in a statement Saturday night.

Residents of the Beltline neighbourhood were happy that their community was no longer filled with 'freedom' protesters as demonstrators gathered in other areas of the city.

Hunter Yaworski with Community Solidarity Calgary held a 'Read a Book' event in Central Memorial Park welcoming residents back to enjoy the area once again.

"People should be allowed to use this beautiful park on a Saturday afternoon and not have to worry about being harassed or being surrounded by any hateful kind of vitriol," he said.

"We're happy that people here stood together last week, that the community came together in the Beltline and on 17th Avenue to reclaim what's rightfully theirs."

Other community members like Alyssa Quinney helped set up a sign supporting healthcare workers at the Sheldon M. Chumir Health Centre across the street.

"I think it's a nice change of scenery for the folks that work there," she said.

Three men who disappeared after planning to rap at a Detroit party were killed by multiple gunshots, police said Tuesday, five days after their bodies were found in a vacant, rat-infested building.