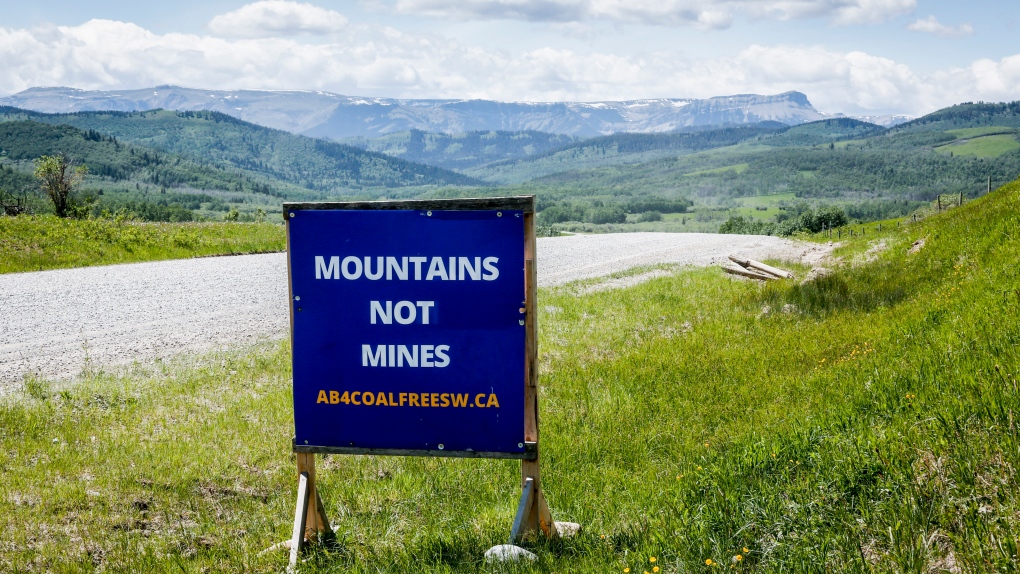 A sign opposing coal development in the eastern slopes of the Livingston range south west of Longview, Alta., Wednesday, June 16, 2021. The Canadian Press requested information about the contamination of Window Mountain Lake in a FOIP request, but the government returned data that had been largely redacted. THE CANADIAN PRESS/Jeff McIntosh

The Alberta government is refusing to release information on toxic contaminants in snowpacks downwind from mountaintop removal coal mines.

The data was collected by two senior provincial government scientists who conducted research into the impact of windblown dust from mines in British Columbia on a pristine Alberta alpine lake. They recently published a paper concluding that sediments in Window Lake are as contaminated as lakes downwind from the oilsands.

They also analyzed contaminants in area snowpacks, data as yet unpublished. That data appears to have been presented to senior Alberta Environment staff in November.

The Canadian Press filed a freedom of information request to have that presentation released. In response, the news agency received a copy of a slide deck containing information that was already public, minus large redactions.

One remark that survived the redactions suggests the complete document includes information on contaminant levels in the snowpack around Window Lake.

Under a heading “Next Steps,” the released documentssay: “Proposeto conduct additional lake sediment and snow sampling.”

How the redactions were justified also suggests the data exists. Information was removed under sections of legislation that allow the government not to disclose documents that may contain valuable intellectual property or to protect the researcher's right to publish first.

The Canadian Press contacted an Alberta scientist not employed by the province who has seen the data and confirms it exists.

Bill Donahue is another independent scientist in B.C. and former head of Alberta's Environmental Monitoring and Science Division. He hasn't seen the snowpack research.

He pointed out that even if initial concentrations heavy metals and hydrocarbons of the kind found downwind of the mines are low, they don't dissipate and gradually build up in the environment. As well, contaminants from snowpacks are often released in a concentrated pulse as the buildup over months is released during the spring melt.

“The amount in the snowpack at a given time in a given year may vary, but it's an absolute certainty that regional contaminant deposition on all landscapes today is far higher than it should be and that coal mining in (southeast B.C.) is the cause,” he wrote in an email.

The paper on sediments in Window Lake, published in November in the journal Environmental Science and Technology, came to disturbing conclusions.

It found levels of contaminants such as polycyclic aromatic compounds, known carcinogens, reached 30 times pre-industrial levels and in some cases exceeded Canadian guidelines for the protection of aquatic life. Levels of selenium, toxic to fish, had doubled.

At the time, Alberta Environment did not make either of the paper's authors available for interviews.

Other scientists in both the United States and Canada praised the work.

The policy, however, is enforced by ministerial order, which can be lifted at any time without notice.

Alberta Energy Minister Peter Guthrie has said there are no plans to lift the order. But he has not specified how long it will remain in place or indicated it would be reinforced by legislation or regulation.

This report by The Canadian Press was first published Jan. 6, 2023.