Analysis of guns and ammunition seized near Coutts, Alta. blockade

Analysis of guns and ammunition seized near Coutts, Alta. blockade

The mixed cache of weapons and ammunition seized by RCMP near Coutts Monday could carry heavy legal penalties and suggest some were planning for violence.

Based on photographs of the seizure provided by RCMP, there appear to be seven semi-automatic rifles. At first glance, six appeared to be designated "prohibited" under the federal assault weapons ban.

However, some firearms owners have pointed out that five of those six guns appear to be a non-restricted AR-variant manufactured by Spectre Limited, called the WS-MCR, which retails for about $1,600.

Despite having similar function and features to many newly-prohibited firearms, under current law, the Spectre WS-MCR are the same as many common hunting rifles.

Just one of the remaining firearms appears to fall under "prohibited" status. There are tens of thousands such guns still registered and in private hands while the federal government works out details of a planned buyback program.

"Most of those rifles were legal up until last year. They're not legal now. If you have one it's supposed to be sitting in your [. . .] gun locker in your house," says David Bercuson, an author and military historian.

He says there are things about the guns that only investigators will know for certain - namely whether any of the assault-style rifles were capable of fully-automatic fire.

"Some of those rifles are fairly easy to alter and others are not," Bercuson says.

"What was being planned with those guns?" Bercuson asked. "Pretty well all of them, in the way that they were displayed on that table, illegal."

He says while he opposes the blockades, Canadians do have a right to protest and make themselves heard but the recent blockades are too damaging to the economy and the ordinary citizens the protests allege to represent.

“I don't want to see people who would use peaceful protest as a guise for plotting something much more devious, and much more dangerous," he said.

Two handguns and magazines were seized. Handguns are not illegal but are tightly controlled and must be registered. A legal owner may only possess them in their home, at a gun range licensed for restricted weapons or to take them to a gunsmith for repairs.

So, an owner with a Restricted Possession and Acquisition License can drive to their gun club and back home — as long as the handgun is unloaded, locked up and not visible from outside the vehicle – and everything is legal.

Legal transport also requires an Authorization to Transport (ATT) from the chief firearms officer in the region.

Also seized were three bolt and two lever-action, scoped hunting rifles which do not require registration under Canadian firearms law. A shotgun was also seized.

While typical hunting rifles are slower to fire and reload, they are also typically more accurate at longer ranges. As a group of weapons, a dedicated group would have the tools to create chaos and then put accurate shots into the middle of any ambush.

Less obvious to most is the apparent body armour displayed in the seizure. Body armour is restricted to certain licensed holders such as law enforcement and armoured truck guards. 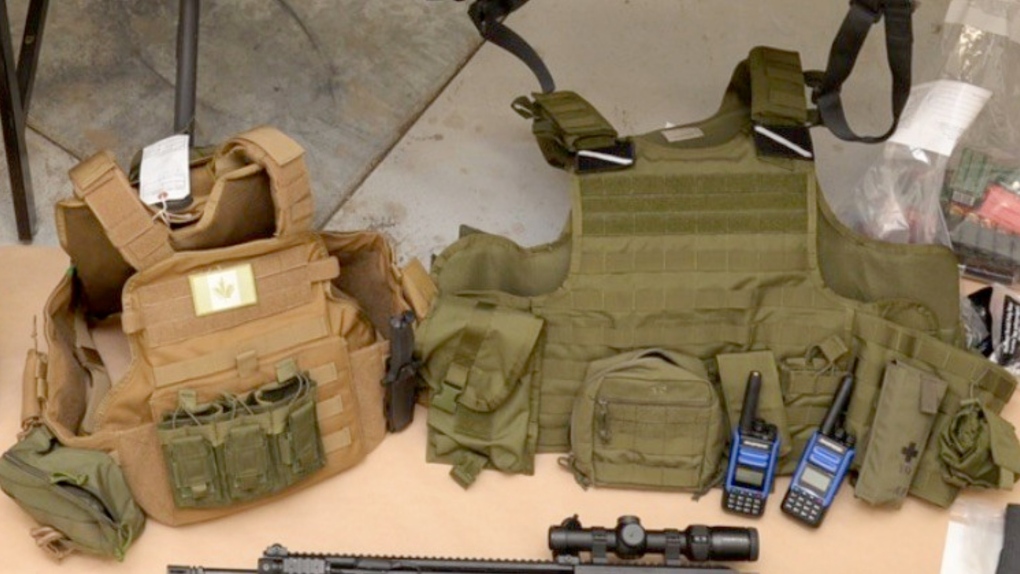 The Canadian Anti-Hate Network identified patches on one of the vests of seized body armour as belonging to an emerging right-wing militia network known as Diagolon. (RCMP handout)

The Canadian Anti-Hate Network identified patches on one of the vests as belonging to an emerging right-wing militia network known as Diagolon. According to CAHN the group — which has chapters across the country — believes a violent revolution is coming and is necessary to dismantle the current system.

CAHN says Diagolon and its associated white slash across a black background is a reference to a future country made up of the remaining "sane" portions of North America between Alaska and Florida. The group also has posted pictures with members displaying a diagonal arm gesture across their bodies.

As of Tuesday afternoon 11 people had been charged in relation to the seizure. Most are facing weapons and mischief charges. Four have been charged with conspiracy to commit murder.

BREAKING: Gear seized by police at #Coutts includes a plate carrier with Diagolon patches. Diagolon is an accelerationist movement with members and chapters across Canada. Its de factor leader is Jeremy MacKenzie.
1/pic.twitter.com/SPTrbXkOjh pic.twitter.com/z7J9ZdCjUk