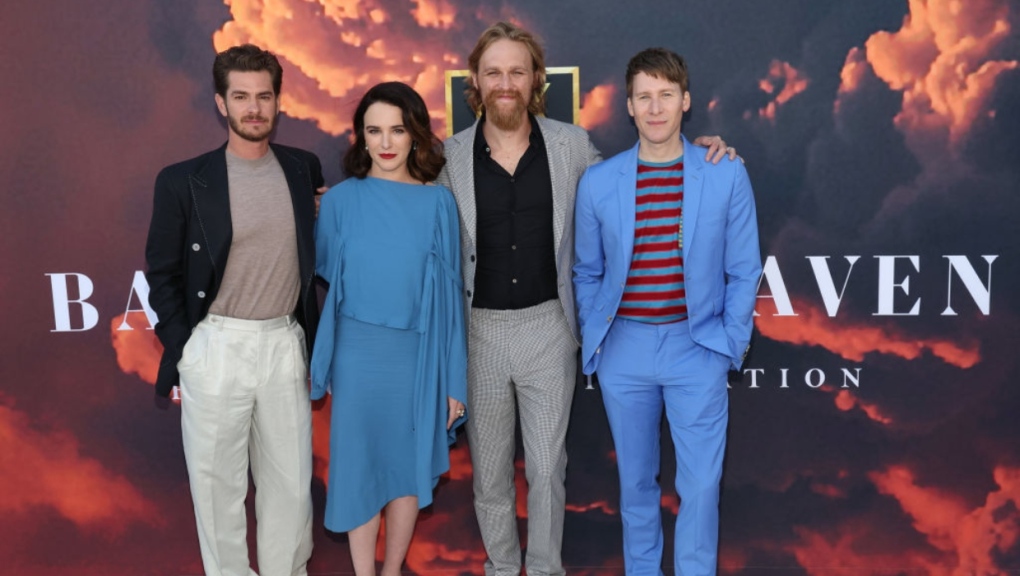 From left to right: Andrew Garfield, Tyner Rushing, Wyatt Russell and Dustin Lance Black attend the Disney FYC event for FX's 'Under The Banner of Heaven' at the El Capitan Theatre on June 5, 2022 in Los Angeles, California. (Photo by David Livingston/Getty Images)

Actor Andrew Garfield is sharing all the things he loved about filming in Calgary in a new interview for Variety magazine.

The 38-year-old spent six months in the city last year while making the true crime FX mini series Under the Banner of Heaven, based on Jon Krakauer's 2003 book.

Speaking about his experience in a 33 minute-long Actors on Actors interview with Zendaya, Garfield said he and the rest of the cast spent lots of time together outside of filming.

"There was beautiful mountains and lakes and really good restaurants in the city," he said, at around the 24 minute mark of the YouTube interview.

“You’re figuring out a new city together and riding around on those Bird scooters, trying to find the best ribs in Calgary and not get COVID. It’s like it becomes a game."

"There’s a place called the Repsol Centre that I went most days, which had a cold plunge and a steam room and a great gym – shout out to the Repsol Centre, love you guys, miss you guys so much. Repsol for life!" he said.

MNP Community and Sport Centre CEO Jeff Brooke says having Garfield at the gym while he was in town was great.

"He was a pleasure to have in our facility, was friendly and treated everyone with respect," Brooke said.

"Receiving this shout out from a celebrity that once had to get into Spiderman shape is high praise. He knows fitness and training, and has trained with the best. That he recognizes MNP Centre as a world-class facility just validates what we already knew.

"MNP Community & Sport Centre has something for everyone from the beginner to the superhero."

As the interview continues, Garfield explains that Under the Banner of Heaven was a passion project for creator Dustin Lance Black.

The show tells the story of the real-life murders of Brenda Wright Lafferty and her 15-month-old daughter Erica and its connection to Church of Jesus Christ of Latter-Day Saints fundamentalists.

"He's an ex-Mormon himself, Dustin, and it's very, very personal for him," Garfield said.

He said it was Black's commitment to the project that brought the group together.

"We had a great group of actors – Daisy Edgar Jones, Wyatt Russel, Sam Worthington and Denise Gough – just amazing, amazing actors, and we were all on location together, and that's kind of fun."

Garfield said though the content the show focuses on was heavy, it was his visits to MNP Community and Sport that helped him relax.

Zendaya and Garfield worked together on the movie Spider-Man: No Way Home.