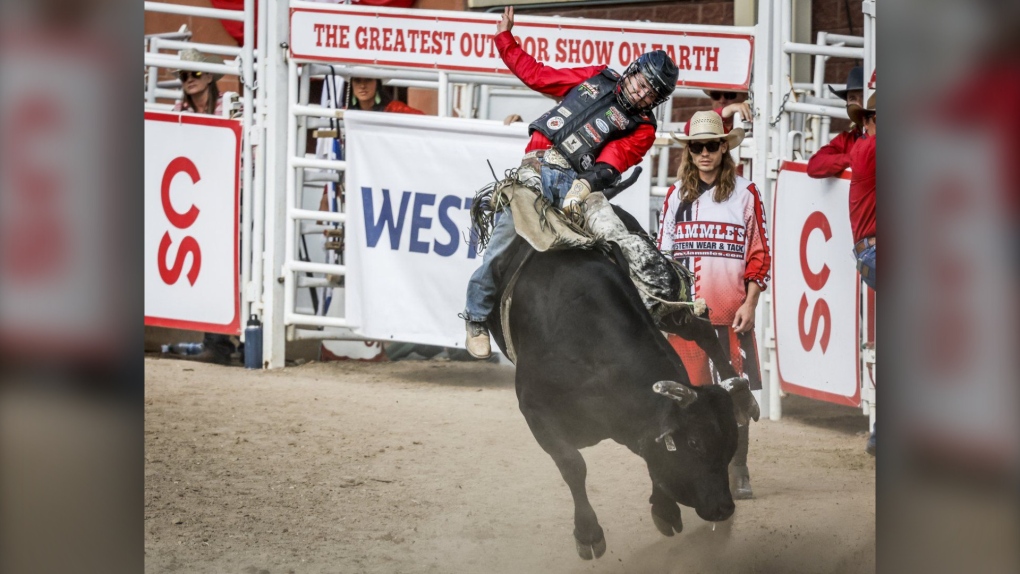 Both Buttar and Proctor posted scores of 88.5 points atop their bulls in a bonus round of action of the marquee event in front of a near capacity crowd at GMC Stadium.

"Shane’s a good guy, I’ve looked up to him for a long time," said the 29-year-old Buttar of Eatonia, Sask., in regards to the 37-year-old Proctor who hails from Grand Coulee, Wash. "It was a tie, but I didn’t know if they were going to break it or not.

"I didn’t know what they were going to do. It was just a waiting game and we were sitting there nervous."

Buttar and Proctor — along with Brazilian bull rider Alan De Souza and Jared Parsonage of Maple Creek, Sask. — were all given second chances after they were bucked off their bulls in the final round.

After Proctor posted an 88.5-point ride atop 2 Guns, Buttar matched his competitor's score with his wild ride aboard Lil Hootch.

"I knew what I wanted to do and I knew what I had to do to get the result," Buttar said. "I was just taking breaths and staying focused on the task at hand."

Winning the event 11 years apart was special for Proctor.

"It feels really good to accomplish that goal one more time," he said. "I’ve had my ups and downs here in Calgary and that's part of the business. We’re finishing on a high note today."

Ten competitors in each of the six events qualified to compete on Sunday and only the top four from the first go-round advanced to the finals.

Thanks to his 89.5-point ride atop Baby Kibitz, 25-year-old Logan Hay of Wildwood, Alta., edged out his younger brother Dawson, 23, to win the saddle-bronc event.

"It's always nice to come out on top, but it's pretty special to ride with all four of us in the short-round like that. It's a pretty special day for me to be able to share that with the boys."

"He’s pretty tickled," Logan said of his legendary father. "He was just excited that Dawson and I both made the final four. (He) tells me to stay calm and just ride like I can — and that’s all you can do."

Kassie Mowbry of Dublin, Texas won the barrel racing championship in a quick time of 16.977 seconds to edge out Dona Kay Rule of Minco, Okla., by just .137 for top spot.

'It's just amazing — I'm still shaking," said Mowbry, who praised her horse Famous Ladies Man. "I just feel so proud of my horse for holding it together like this. I just feel like he's livened up with this crowd and ran so hard every time he heard it cheer."

Will Lummus of Byhalia, Miss., captured his first steer wrestling title in Calgary by recording the top time of 3.6 seconds.

"This one's everything," Lummus said. "I’ve been here one other time (in 2019), and I was in the final four and didn't really draw the steer I wanted. I knew I had a chance — they had won a round with him earlier."

His travelling partner, Ty Erickson of Helena, Mont., wound up in second spot after stopping the clock at four seconds even.

Caleb Smidt of Bellville, Texas, won the tie-down roping title in a time of 6.8 seconds. It's the second Calgary Stampede title for Smidt, who also won in 2019.

Later in the evening, chuckwagon driver Kris Molle won his first-ever Cowboys Rangeland Derby title by edging out Layne MacGillivray at the finish line in a time of 1:13.56.

Four-time Rangeland Derby champion Kurt Bensmiller of Dewberry, Alta., had to settle for third and a cheque for $10,000.

This report by The Canadian Press was first published July 17, 2022.