CALGARY -- It’s popular in Asia and parts of Europe and now a rental company that delivers dolls to your door has opened up shop in Calgary.

Natrl Dolls is an adult-only business that launched in July 2019. It has a variety of female sex dolls, and one male, available for rent either hourly or overnight.

"We have everything from couples, to single men, people with physical disabilities," said the founder, who asked CTV News not to use his real name out of concern it will impact his job in the oil and gas industry.

"Our vision at Natrl is to normalize the fact that people have a "Natrl" desire, and a healthy sex drive is normal," the website states.

"The use of manufactured sexual objects is a way to exercise any kind of fantasies and desires, people may have in a controlled environment."

The dolls all come with bios and backstories. There’s Anastasia, the ski instructor, Lara, who recently retired from the military, and Cameron, who is the only man on the roster.

There are a few other sex doll rental companies in Canada but the industry is relatively new.

"Right now our number one problem is exposure because people do have a certain taboo surrounding the industry," the found said.

"People spend some time with the dolls and realize it’s not just a sexual act, it’s also a bonding, a comfort situation." 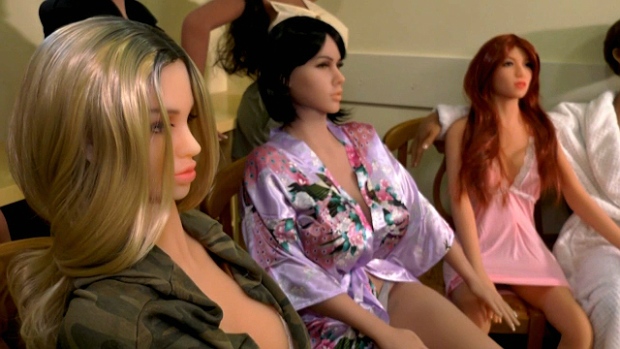 There have been a few attempts to open sex doll brothels in Canada, which have sparked debate surrounding the objectivication of women.

"There's not a lot of understanding of how these objects are influencing our ability to have sex with other people, our beliefs about sex, our arousal templates," said psychologist Natalie Vandenberg, who believes more research on the subject is needed.

A study out of the United Kingdom of 83 sex doll owners — who are overwhelmingly heterosexual, middle-aged men — found people have them for reasons other than sex. Companionship, a hobby or art form and mental health, were all cited.

Although 77 per cent of respondents said relations was the primary purpose.

The owner of the Calgary company said the dolls have been rented for people looking to experiment, like one client who didn’t want his name used.

Each doll is discreetly delivered, picked up and cleaned; a process that takes about an hour and a half.

"Our dolls are sanitized to an extreme extent, passing through four different cleaning processes, and audited various times, and checked over with a black light," the website states.

Alberta Health Services has not received any complaints about cleanliness.

"Given the relative infancy of this type of business, there are no requirements for AHS regulation of a business of this nature, either for approval to open or on a routine basis," an AHS statement said.