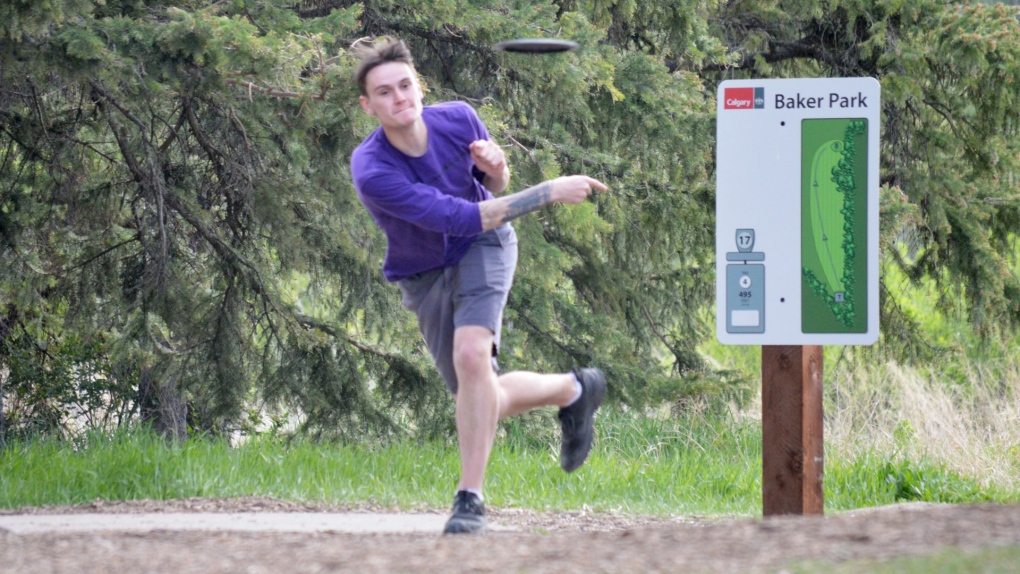 Josh Meijndert tees off on Hole 17 at Baker Park. Meijndert and Cael Elford are headed to Princeton, Ind. to compete in the 2022 PDGA World Amateur Disc Golf Championships.

A pair of Calgary disc golfers are getting set to step onto the world stage.

Josh Meijndert and Cael Elford — who spends his summers in Invermere, B.C. — have been invited to compete at the 2022 PDGA World Amateur Disc Golf Championships, running from June 21 to 25 in Princeton, Ind., where they will be up against a field of about 500 of the best players from around the globe.

There they will compete in four rounds of tournament play, followed by a fifth round if they make the final cut.

"My goal is to make the Top 20 per cent," said Meijndert, noting that would put him in the Top 100 in the world.

Getting to the prestigious event was no easy feat for the pair as competitors have to be invited, based on the number of tournament rounds played and their Professional Disc Golf Association (PDGA) rating.

Disc golfers are rated based on their score after each round of tournament play and how it compares to the rest of the field and the difficulty of the course – the lower the score, the higher the rating.

Meijndert is currently rated at 947, while Elford is rated at 892.

By comparison, Paul McBeth, one of the top professionals in the world, is currently rated at 1052.

Both Meijndert and Elford competed at the recent Spring Runoff event in Lethbridge, where Meijndert finished fourth in the pro division and Elford was 18th in advanced.

Now 22, Meijndert started disc golfing about eight years ago while on vacations with his family at Farragut State Park in Idaho.

He would play there for a couple of weeks each summer, then started taking the sport more seriously after carrying a disc with him during a backpacking trip to Australia three years ago.

"I came back and I was hooked," he said. "I just played all the time after that."

It took him about a year to get what he calls "good" at the sport and he's been progressing ever since, now playing in up to 10 tournaments a year.

Meijndert competes in the pro division, usually finishing in the Top 5, however he, like many other players, doesn't accept cash prizes so he can keep his amateur status.

Qualifying for the tournament was tough, and getting ready for it isn't much easier.

To keep his throwing mechanics consistent, Meijndert plays as often as possible and in the lead up to an event, will throw at least 200 practise putts each night.

"And I normally do a lot of field work as well," he said.

"In the lead up to any big tournament for me, three weeks before, I do two days of field work a week, I try and play six days a week and I putt every day."

And the work pays off as Meijndert — who recently completed his undergrad in business marketing and plans to start law school in the fall — holds the current record of -17 at the popular Baker Park course.

When he's not in tournament mode, Meijndert tries to help others learn the game, putting on introduction to disc golf seminars through the Calgary Disc Golf Club.

Accessibility, he says, is a main driver of the sports explosive growth in recent years, especially during the pandemic.

"You can play anytime, anywhere, you don't have to make a tee time, you just grab a disc or two or your entire bag, and go" he said.

Canadians registered to compete at the 2022 World Amateur Disc Golf Championships include:

Health Canada is encouraging Canadians to check their cupboards and kitchen tables as the agency has recalled more than 30 types of Indigo-branded items including ceramic mugs, mug ornaments and houseware products due to potential mould contamination.

Authorities in Western Australia on Wednesday recovered a tiny but dangerous radioactive capsule that fell off a truck while being transported along a 1,400-kilometre Outback highway last month in what an official said was like finding the needle in the haystack.