CALGARY -- Several of the city’s brewers and distillers are shifting their focus from spirits to sanitizer in an effort to help contain the COVID-19 outbreak.

Many grocery stores and pharmacies in Calgary have sold out of hand sanitizer and the craft brewing and distilling industry is stepping up to try and fill the void.

Marty Lastiwka with Skunkworks Distillery started producing small batches of sanitizer in the last few days and he says he’s already been overwhelmed with people coming to ask for bottles.

"There’s some crazy need, I guess. There’s lot of people who still need to be out and about doing things to keep things running," Lastiwka said.

He adds he’s already had requests for the sanitizer from Canada Post workers, contractors and flight attendants.

"For our moonshine, we pick just the best parts of the cut, the parts that taste good. The parts that don’t taste so good we can use for hand sanitizer,” Lastiwka said. He then adds hydrogen peroxide, xanthan gum to make it easier on the hands and some lime juice for the smell.

Skunkworks is giving away the hand sanitizer for free.

Annex Ale Project has coordinated an effort with Two River Distillery and Raft Beer Labs to start making sanitizer for sale and to give to homeless shelters and seniors' homes.

Andrew Bullied, Annex’s founder and director of brewing operations, says they already have a deal in place to sell the sanitizer through a local grocer. Bullied says the grocer will be made public in the coming days, closer to when the sanitizer is ready.

"It’s becoming very clear that products like this are in desperate need," Bullied said.

"This is how we can apply the equipment and infrastructure we have to make a difference for Albertans and Calgarians."

Bullied aims to have the first batch ready by next Friday, as long as proper federal approval is obtained. 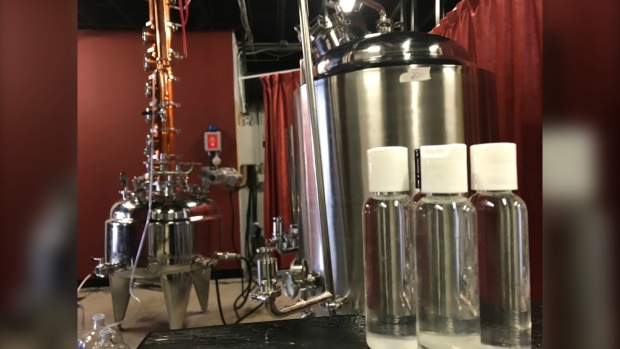 Euan Thompson with Raft Beer Lab is providing support to make sure the product is made properly. He says it’s an easy transition for brewers and distillers to switch to making sanitizer.

"Breweries literally make all three of the components of that product, just by making beer. You’ve got ethanol, glycerol and hydrogen peroxide all contained in that product," he said.

Two River Distillery will help distill the Wash — essentially a high-alcohol beer — from Annex and send back the ethanol to be mixed and packaged.

"To do a thousand litres, it’s between seven to eight hours of work," said Mark Freeland with Two Rivers Distillery.

With the sit-down tasting areas of all the distillers and brewers shut down temporarily, the groups are hoping the sanitizer sales will help them pay staff stay afloat.

Even though taprooms are closed due to the COVID-19 virus, all of the businesses are still selling their beer and liquor to customers — most are even offering delivery.

"Our moonshine tastes a lot better than what we’re making for hand sanitizer," said Lastiwka.