About a thousand Calgarians gathered Sunday afternoon, surrounding Olympic Plaza and joining hands in a protest against the city’s vaccine mandate for its employees and provincial public health restrictions.

The rally, organized by the group Calgary Freedom Central, invited all Albertans to stand in solidarity for bodily autonomy and freedom from medical coercion.

Among those in attendance were frontline workers, including Annette Park who works as a community nurse and stands behind her co-workers right to choose to get a COVID vaccine.

Many others at the rally echoed those statements such as John Carpay, a Calgary lawyer and staff president of the Justice Centre for Constitutional Freedoms (JCCF).

He claims unvaccinated people are being treated unfairly if they’re being mandated to get the shot at their place of work.

“We have the persecution of the unvaccinated, the worst persecution in Canadian history in at least 80 years,” Carpay said.

Carpay admitted in July to hiring a private investigator to observe a Manitoba Queen's Bench chief justice's compliance with COVID-19 restrictions and was temporarily removed from the JCCF for his actions.

“We know this is not science-based and no science to back up the notion that unvaccinated people are somehow worse spreaders of the virus than the vaccinated," he added. 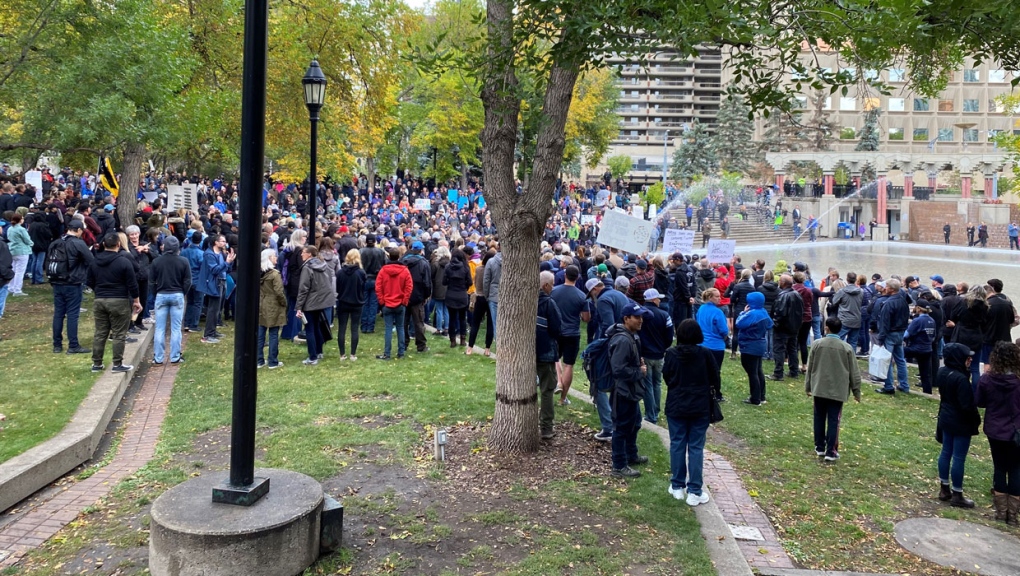 However, the data would suggest otherwise when looking at Alberta’s recent COVID-19 numbers.

According to the province as of Friday, 686 people are being treated in hospital for COVID-19, 169 of whom were in intensive care.

Sunday’s rally finished up with a silent march throughout the streets of downtown.

The event in Calgary will follow with other protests also planned across the province on Wednesday in Edmonton, Grand Prairie, and Lethbridge.

Blake Willard served 32 years as a Calgary firefighter and commended currently working first responders in taking a stand against the city’s vaccine mandate.

“I’m here to support all the people, not just frontline firefighters, but all people who decide that they want a choice in this matter,” he said.

“There’s no reason for anybody to be forced into anything or stopped from going anywhere.”

Clay Farnsworth with the group Police On Guard for Thee also sent his support on behalf of police officers who are against taking the COVID-19 vaccine.

“It’s not just us retired guys, it’s the active-duty police officers coming out saying this is wrong. I’ve read the Charter many times and I’ve never seen anywhere in there where it says the government knows what’s best for my body.”

According to the City of Calgary, employees without religious or health exemption, who are not fully vaccinated by Oct. 31 will be disciplined and could be fired.

The Calgary Firefighters’ Association was also contacted Sunday for comment, but stood by a statement it sent out Friday which stated 85 per cent of its members are vaccinated and that it would continue to advocated for vaccination.

“We are proud to keep the citizens of Calgary safe. Vaccinations are a vital part of keeping our members, our families and the public safe,” the statement read.

“We are concerned that groups, such as Calgary Freedom Central, who have been actively protesting public health measures have been referencing the support of firefighters and first responders. We want to be clear that your Calgary Firefighters Association does not in any way endorse and is not affiliated in any way with these groups.”

EXPERT: LEGAL ACTION NOT LIKELY TO HAVE AN IMPACT

University of Calgary professor of health and law policy Lorian Hardcastle expects first responders who are against the vaccine mandate to take legal action, but notes their claims will likely be rejected.

“We're balancing an issue of individual's rights to choose to accept vaccinations or not, but then on the other side of that equation is the very compelling public health situation we find ourselves in,” Hardcastle said.

“You can get arguments around mandatory vaccines being contrary to the collective agreement of a union so those kinds of arguments can tend to come up, but I do anticipate that for the most part, vaccine mandates will be upheld when those are litigated.”

Hardcastle adds that several healthcare workers are also referring to legislation that was passed last year that would restrict protesting and blocking sidewalks to protest, which is what has happened during protests outside of hospitals.

“I think that we can't pick and choose when we use it, we can't say that this legislation is problematic, but since we disagree with these people protesting vaccines, we shouldn't use it. I think that that's one argument that's tended to come up in this in this context as well.”

Russia accused of inciting genocide in Ukraine in new report

Russia's actions in Ukraine provide enough evidence to conclude that Moscow is inciting genocide and committing atrocities intended to destroy the Ukrainian people, according to the first independent report into allegations of genocide in that country.

Canadian Blood Services wants to scrap a lifetime ban on sex workers giving blood in a further move to make blood donation more equitable. The blood-donation service this month recommended to Health Canada that it abolish the lifetime ban on donation by people who have taken money or drugs in exchange for sex.