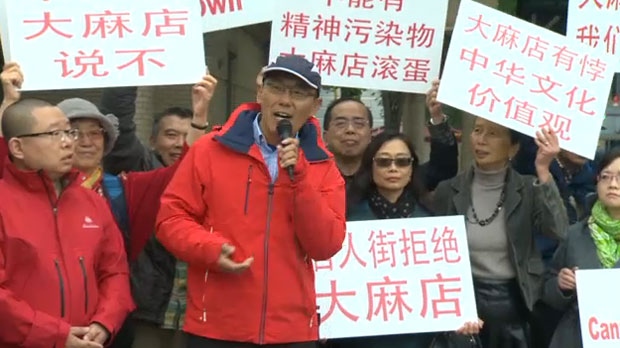 Members of Calgary's Chinatown say they weren't properly consulted about a cannabis store planned for their community.

As pot is expected to become legal in Canada in the next several weeks, cannabis stores are staking out their claims in several communities in Calgary but there is at least one place where they definitely aren’t wanted.

On Saturday, members of Calgary’s Chinatown gathered to protest a proposal to establish a shop in the community that would sell cannabis and related materials.

They say that the concept is highly offensive to the community, particularly because the proposal went ahead without their consultation or consent.

“This doesn’t align with Chinese cultural values,” says Zack Moyer, who participated in the protest.

He adds that while the city claims it did consult the community, those discussions weren’t publicized.

The group also collected signatures for a petition they plan to present to city council to call for a ban on cannabis stores from opening in Chinatown.

The proposal for a cannabis store in the community has not yet been approved.