Calls to end predatory lending: 'When somebody is drowning, you don't throw them an anchor'

The federal government pledged to take action on payday loan interest charges and fees during the last federal election. Now social agencies are beginning to pressure the government to keep its promises.

The Calgary not-for-profit agency Momentum released a policy paper this week calling for the government to criminalize high interest rate loans.  Presently the Canadian Criminal code defines a criminal interest rate as anything over 60 per cent per year.

"This is far too high, especially for people that we see living on a low income, or with precarious income to be able to dig their way out of debt," said Courtney Mo, Momentum’s manager of policy and research.  Mo also noted that payday loans are actually exempt from the criminal code regulations.

"So we see interest rates here upwards, almost 400 per cent. And that doesn't include additional fees, insurance or other associated costs with high cost credit. So it can be pretty tricky to understand what you're actually paying for the full cost of a loan," said Mo.  "If you were to get a $300 payday loan, typically a two week loan, but most often people need to roll over that loan - so (in fact), if you have that loan for up to a year, let's say you'd be paying $1,170 for the cost of that $300 loan." 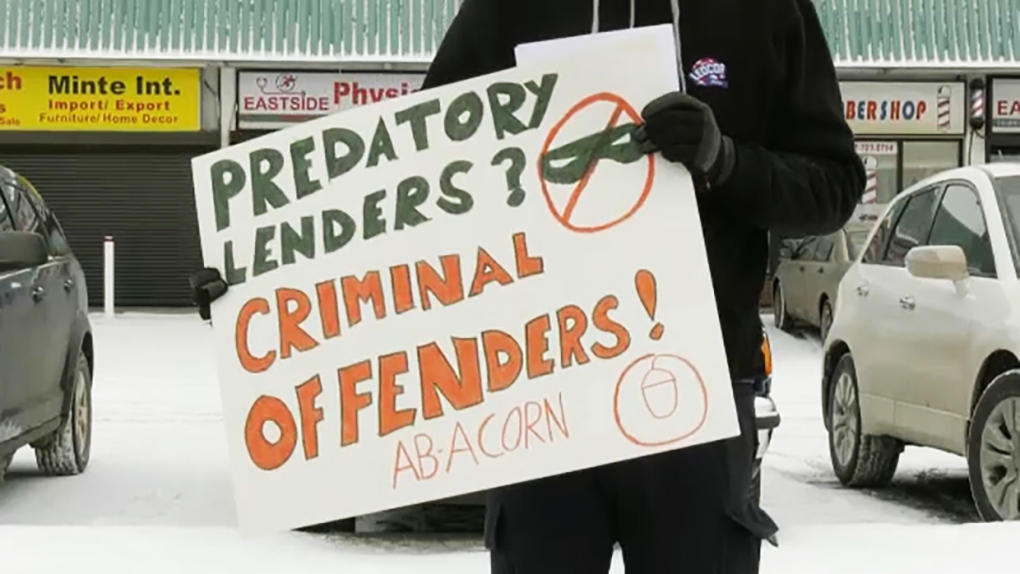 Momentum would like to see the criminal interest rate lowered to 36 per cent including all fees and other charges, and wants the exemption for payday loans removed.

Tina Michelle Moller once used payday loans. The former postal worker lost her job after a back injury.

"A disability is something that you can't always plan for. And that happens with a lot of families and people that something happens. It's emergency, they experience either brand new costs or loss of income,” said Moller.

With the help of programs at Momentum, Moller not only paid off her debt, and built up savings, but developed a new career: she is now a financial consultant, helping others avoid the trap of easy credit and high debt.

"There are some people that do have poor habits, right no matter," said Moller. "Maybe they're in debt, because they bought the latest phone and their bill is $150 a month and they can't afford it. Right?

The maximum interest rate allowed in Canada is 59.9%. This is too high. Join us in asking @DavidLametti and @cafreeland to work with us on lowering this rate for Canadians. We’re proud of our new publication with @ACORNCanada @CanadaPIAC https://t.co/3YsWnBnhEk#faircredit pic.twitter.com/BsqT5HLxcQ

"There are people that do that"," she said. "But there are also people that are in situations that there was nothing that they could do to avoid the loss of income or the poverty that they went into."

"But if you're paying 36 per cent, (interest) then that means your debt will be doubling every two years. And, I mean, that is a very dangerous situation to be in when compound interest is working against you.

"But a lot, a lot of people, they only see the need now," she added. "They don't think about what's going to happen in two years. And that's the real danger that there's no requirement for payday lenders to explain to you the dangers of high interest loans."

The breakdown of the amounts of those loans was:

A few blocks south of Momentum’s office in southeast Calgary, a handful of protesters – all affiliated with ACORN (Association of Community Organizations for Reform Now) Canada - staged a protest outside a Money Mart on International Avenue. It was part of a national day of action held by the organization, which is also calling on the federal government to take action on payday loan companies.

In a press release on its website ACORN Canada calls for supporters to flood the inbox of Minister of Middle Class Prosperity Mona Fortier with letter calling for several changes to loan procedures including:  Lowering the interest rate on installment loans from 60 per cent to 30 per cent; including all charges and fees associated with a loan in the interest rate; creating a federally-funded fair credit benefit so that all low-income people have access to low-cost credit options in case of emergency and support postal banking in all cities; and lowering NSF fees from $45 to $10.

With the exemption in the federal criminal code, regulation of payday loans falls on the provincial government.

In am email statement to CTV Tricia Velthuizen, press secretary for the Minster of Service Alberta, said  "Alberta has some of the toughest regulations around payday loans in the country, and we are committed to protecting Albertans from predatory lenders. We are not currently conducting a review of the province’s robust payday loan regulation system."

The Liberal government is moving to ban Russians sanctioned over Moscow's invasion of Ukraine from entering Canada. The government tabled proposed amendments to federal immigration law in the Senate on Tuesday to ensure foreign nationals subject to sanctions under the Special Economic Measures Act are inadmissible to Canada.