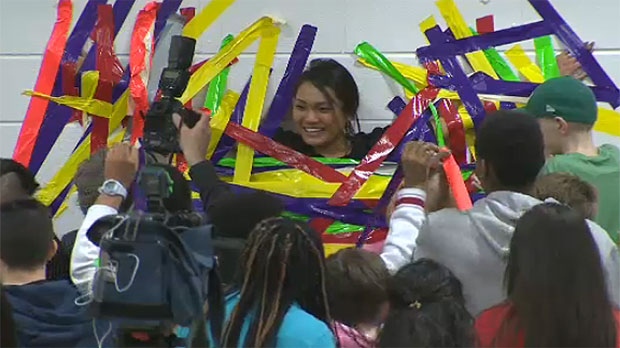 The day wrapped up with students taping two teachers to the gym wall with duct-tape that was bought by donations.

Students at a junior high school in the city’s northwest have wrapped up a creative fund raising campaign to support one of their own battle cancer.

Students at St. Helena Junior High School have spent the last two months raising funds for Alec Remenda, who was diagnosed two years ago with rhabdomyosarcoma, a common soft-tissue cancer that occurs in children.

Alec, 14, is in grade nine and loves hockey so his friends and classmates decided the campaign should be based on the sport he cherishes.

“We just wanted to help Alec and let him know that he's not alone, we all love him, we all support him and care for him and we want him to be okay,” said Priscilla Ksenic, who spearheaded the initiative along with Madison Pierce.

On Monday, The Calgary Canucks Junior Team and the winning team from the school’s Stick it to Cancer Floor Hockey Tournament played a game in Alec’s honour to cap off the campaign.

“Pretty amazing actually that this is all because of what I’ve been through,” said Alec. “It’s great to see everyone. I always miss them when I’m not here and everyone always texts me and sends me stuff on the holidays on how much they miss me and when are you coming back and stuff.”

The students beat their fundraising goal of $4000, raising $5700, and 100 percent of the proceeds will go to Kids Cancer Care.

“I’m honestly shocked that they raised this much this year,” said Alec.

“Every cent makes a difference, every dollar counts especially when you’re trying to fund things that really matter to children with cancer and their families. Sending them to camp, funding the important research, paying for scholarships, this is kids helping kids,” said Christine McIver, Founder and CEO of Kids Cancer Care Foundation.