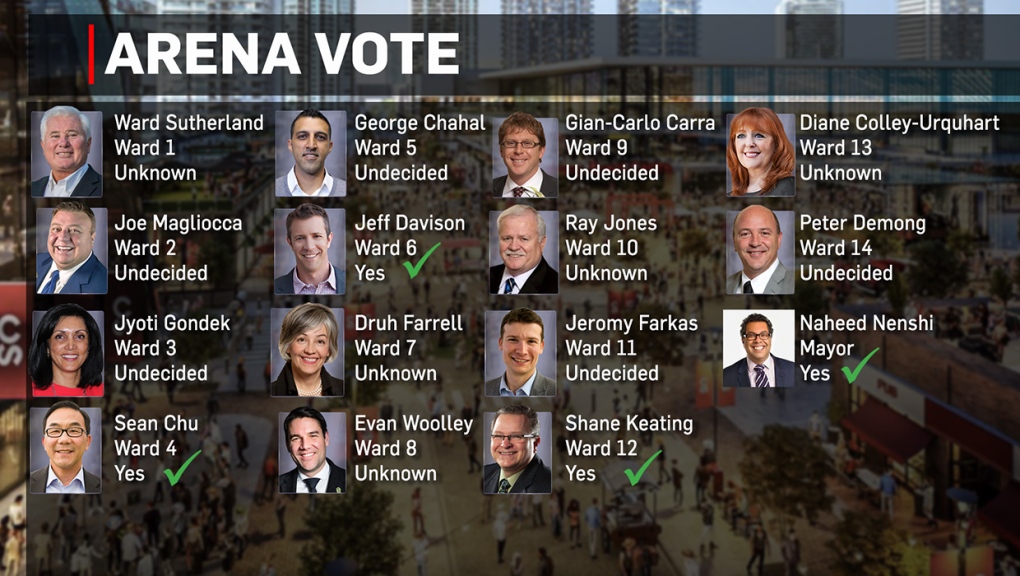 As city councillors prepare to decide whether or not they should foot half the bill for a new arena, many Calgarians are questioning the tight timeline imposed for approving the deal.

While negotiating the proposed deal with the Calgary Flames lasted more than a year, the public is being given just one week to weigh in.

"Calgary councillors should be ashamed of themselves for trying to push through a deal with the Flames that has largely been done behind closed doors just before counsellors are taking off for summer holidays," said Franco Terrazzano of the Canadian Taxpayers Federation.

The agreement would see the two sides each contribute $275 million to build the event centre. The city would also pay more than $12 million to demolish the Saddledome.

'We’re talking about a corporate welfare project that’s going to cost the city nearly $300 million," said Terrazzano. "What’s the rush on this?"

Moshe Lander, a sports economist, says if Calgarians support the project out of civic pride, that’s their prerogative, but anyone who thinks the city will recover its financial investment will be disappointed.

“You don’t use public money to finance sports arenas,” said Lander. “They want to talk about $400 million and the way they are going to generate those funds, but the fact is that's really not going to be the way it plays out. Even if you take the $400 million and divide it by 35 years, you are talking about an annual return of a bit more than $10 million or $11 million a year on return of investments. That’s less than four per cent and ignoring the time value of money.”

CTV asked all the members city council on Tuesday if they would support or reject the deal. The following is a breakdown of their responses:

Six members indicated they are undecided on how they will vote:

CTV did not receive a response from the following members:

**Update: Ward 9 councillor Gian-Carlo Carra was incorrectly included among the councillors who were planning to vote in favour of the arena deal. In a statement to CTV, Carra confirmed he is among the undecided. "I am on record in support of our need for a new Arena/Event Centre. I've got just under a week to consider whether this is the right deal to deliver that project. I'm interested in hearing from citizens."