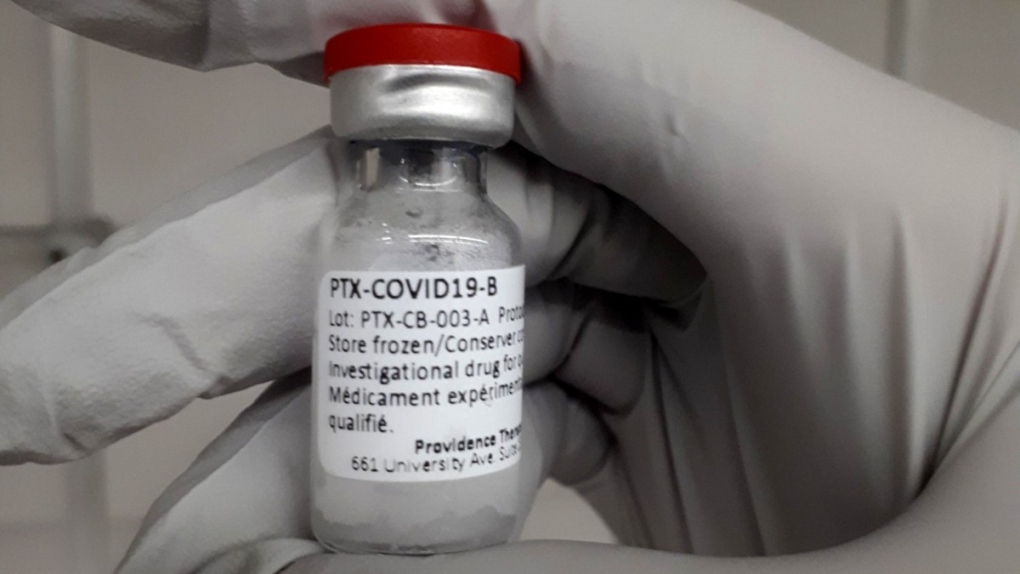 CALGARY -- A Canadian company currently conducting human trials for their COVID-19 vaccine is asking the federal government to respond to their request for support in producing the vaccine.

Speaking at a conference in Calgary on Friday, Brad Sorenson, CEO of Providence Therapeutics criticized the federal government for not responding to their proposal, which was sent a week ago.

"The apathetic response of the Government of Canada to a serious proposal that could save lives is unacceptable," Sorenson said, "Review it and reject it if there is no merit, embrace it if it's viable, but do something."

In the proposal, Providence Therapeutics asked for a $150 million investment which would act as a down payment on 50 million vaccine doses for Canadians.

"We committed to distribute those 50 million vaccines at 30 per cent less than international market rates for comparable mRNA vaccines," Sorenson said.

Manufacturing the vaccine costs more than the $150 million requested, and Sorenson said shareholders are ready to provide capital to ensure enough vaccine doses are available for Canadians.

Delivery on these doses could start as soon as September.

The vaccine is a messenger RNA (mRNA) vaccine which, pending positive results, may be available for immunization starting later this year or early 2022.

Like other mRNA vaccines, it takes two doses for complete vaccination and can be stored at -20 degrees Celsius.

Manufacturing of the vaccine will take place at a Calgary facility, Northern RNA, the site of Friday’s announcement.

The proposal also outlined the importance of having domestic security of COVID-19 vaccine supply and laid out a plan that would see the entire manufacturing cycle be sourced in Canada by 2022.

Due to constraints and capacity issues at Northern RNA, certain aspects of final manufacturing has to be done in North Dakota.

Providence Therapeutics started human trials on Jan. 26 with 60 volunteers between the ages of 18 and 65 partaking.

Volunteers are split into three groups with each group receiving different dose levels. Placebo doses will be administered within each group.

Researchers believe they will receive enough data by April to be able to move into phase two starting in May pending approval of the vaccine.

Several pre-clinical animal trials were previously completed which evaluated the safety and efficacy of the vaccine prior to human trials.

A proposal is prepared to be sent to Health Canada for phase 3 of the trials which would include two thousand volunteers with no placebo shots given.

"Whether it's federal or provincial, I know we're going to get engagement"

Sorenson said he doesn't want to politicize the issue, but is disappointed in the lack of federal response.

"I don't have a choice, I have to do what I'm doing," he said. "If the federal government wants to pull it together and work with us, we're ready. We're ready, willing, and able."

Human trials of the first made-in-Canada vaccine has received interest from health care workers and premiers, with Providence Therapeutics meeting with some provincial leaders Friday afternoon.

"In the end, the people that I wanted to hear the message the most, the people I addressed that letter to last Friday refused to respond," Sorenson said.

Providence Therapeutics has partnered with the University of Toronto, the Ontario Institute of Cancer research, and Sunnybrook Research Institute, yet the vast majority of vaccine manufacturing has been completed without government support.

During the conference, Sorenson asked Canadians to show initiative and demand that our leaders do so as well.

"We're not going to stop communicating with you, Canadians, as to where we're at and what we're doing. It's too important, that is my commitment to you."

Providence Therapeutics' vaccine was completely developed by Canadians, which Sorenson honored for their initiative during the press conference.

"What these 18 Canadians have accomplished under intense pressure needs to be recognized."

The vaccine was developed in under four weeks, complete with licenses to secure necessary intellectual property that was needed to advance their vaccine program.

All of which was accomplished while complying with COVID-19 regulations which reduced the number of employees that could be working at one time.

Sorenson said the made-in-Canada vaccine will help Canadians get immunized and help aid the global need for vaccines.

"We can stop trying to pay to jump the queue and we can contribute to the solution."

In 2015, Sorenson's son was diagnosed with Stage 4 brain cancer the day after his thirteenth birthday.

Providence Therapeutics was created shortly after with a focus on creating a vaccine for cancer using mRNA.

2020 was supposed to be the year they entered clinical trials.

When the pandemic started, focus shifted to creating a COVID-19 vaccine.

"We put that cancer program on hold, a program that my son might need one day. Why? Because we had access to cutting-edge technology that could and is playing a major role in stopping the pandemic."

Pausing the cancer vaccine program was a difficult decision, but Sorenson says it was his moral obligation and his team took the initiative and got to work.

"Initiative improves outcomes and COVID-19 is like a cancer on our society," he said. "It is in our country, it is invisible, it is spreading, it is mutating, we cannot ignore it. If we do, people will die."

"We're giving up the most important thing we have in this world—our time and our lives."

Providence Therapeutics' proposal to the federal government is available on their website.